I remember in the 1970s, my older sister brought home a book of yoga poses by Indra Devi. I was double jointed, so I took to yoga easily and happily. It was fun to show off my ability to put my leg around my neck and to do a full lotus position and a headstand. What I found most interesting about the Hatha Yoga method outlined in the book was the breathing exercises. They were described so well that I learned how to do them just by reading her instructions.

When I was old enough to drive I started taking a Hatha Yoga class. It was held in someone’s home 45 miles from my house because there weren’t any yoga studios back then. There was also no such thing as a yoga mat. That’s right. No yoga mats. We were instructed to bring a towel. There was also no such thing as yoga props like straps and blocks either. Never mind yoga pants! We were instructed to wear loose fitting clothing. Geez, I sound old, right?! “In my day… “ 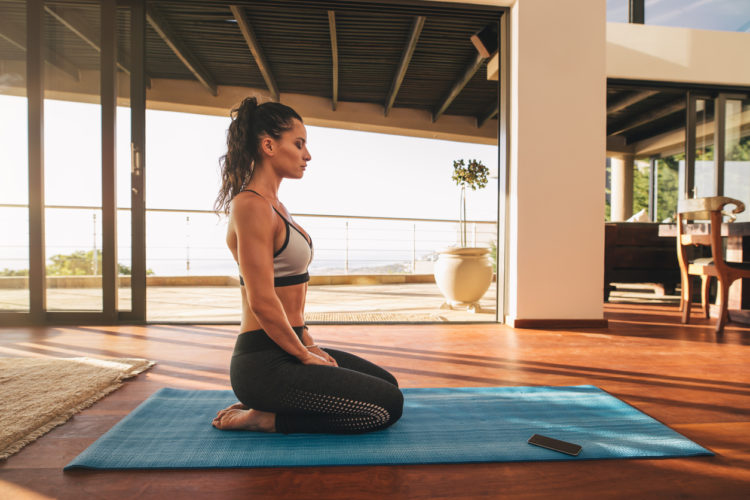 I loved yoga classes. They were mostly made up of women at that time. The few male attendees would invariably fall asleep when in Savasana, aka Corpse Pose, which is the relaxation pose at the end of each class. Their snoring was the dead giveaway that they had not indeed passed on. Ha! We would have to wake them up when class was over. Lol.

I continued to practice yoga at home and I attended weekly classes whenever I found a good teacher in whatever city I was living in at the time. I also started going away for yoga retreats. What I like to call yoga-sleepaway-camp. Full-on yoga class schedules were held simultaneously all day long for all levels of experience. During the next few decades, I noticed that yoga classes were being offered at local gyms or in the backrooms of salons. Then they became a fixture in the community. Now, it seems that some sort of yoga class is offered in every city and town in America. When I moved 20 years ago to a teeny tiny town with less than 1000 residents, there were three yoga studios! How did that happen? What made yoga so popular?

According to a study done by the National Center of Complementary and Integrative Health, a division of the National Institutes of Health, adult yoga practitioners rose from 5.1% in 2002 to 6.1% in 2007 and 9.5% in 2012.

85% of them thought yoga contributed to reduced stress; two-thirds reported added motivation to exercise more, and 4 in 10 were moved to adopt a healthier diet. Practitioners also reported improved emotional health than subjects who used supplements or sought chiropractic manipulation. Even children and young adults are adopting yoga practice with 2.3% of child practitioners in 2007 increasing to 3.1% in 2012.

Maybe it’s the lack of competition that is fueling the popularity of yoga across America. That’s what drew me to yoga. When I belonged to a NYC gym, I could do 100 sit-ups on the simple Roman Chair. Which is no simple feat. But, I couldn’t do pushups. There was a lot of competition. It was always about how you looked in the mirror. Yoga differs from gym exercises in that it is about moving at your own pace. You go into a pose with little effort but your skill increases over time. Movements are slow and gentle, depending on the yoga style. There are eight popular yoga styles being practiced in America according to Gaiam.

Most yoga practices teach you to move with the breath. Hold on the inhale, move with the impetus of the exhale. So, not only are you getting more flexible and gaining strength through yoga, you’re also calming your mind and body through deep and thoughtful breathing. Which explains why people are discovering the emotional benefits.

Some yoga styles are more physically strenuous by design. Once, while I was at yoga-sleepaway-camp, some guy named Bikram Choudhury was there from India teaching his new yoga practice to the American audience for the first time. If you don’t know what Bikram yoga is, perhaps you’ve heard of hot yoga. Different name. Same thing. Anywho, the temperature in the entire ashram was turned up to 104° Fahrenheit! Even though I only took one class with Bikram himself, for the rest of my stay, I had to endure the heat in all the other classes and while eating and sleeping. Who can breathe in that kind of heat?! Never mind when you’re trying to assume each yoga pose or asana. Not a fan of hot yoga myself.

I think the popularity of yoga is its nonjudgmental approach to getting fit. You don’t have to be buff. You don’t need to compete. It’s an easy practice because you go into a pose at your own pace and as far as your body will allow you to move without pain. Hence, many people who are recovering from injuries or illness practice yoga because there is less chance of reinjuring themselves. It’s also very calming because you are breathing deeply. So, many people do yoga as a spiritual practice. I’m oversimplifying the practice of yoga to make a point about its accessibility and the benefits that you can enjoy by doing it.

Yoga is now recommended for managing stress. Some asanas and breathing exercises are ideal for stress reduction. A fairly recent yoga style called Restorative Yoga is a three hour class where one assumes postures with the aid of blankets and props. Then you deeply settle into the pose for several minutes to enjoy the ultimate healing relaxation. Yoga studios have become the spiritual center of a community because of the peace one experiences through yoga practice. Not to be confused with a religious center. Classes today have all ages and there is a more balanced mix of men and women.

Yoga has been my constant fallback practice when my life is out of balance. It has helped me to recalibrate with my highest self. That it also helps me center myself and remind me of who I am at the core of my being is the secret outcome of yoga. I think this is why it has gained popularity. The secret is out. Overlook the hype of yoga (better body, et cetera). You don’t need to look good in your yoga pants or even wear yoga pants. For thousands of years, yoga has always been the promise of being a healthier person in mind, body, and spirit. So, yeah. Yoga IS all that.

Are you a yoga practitioner or yoga teacher? I’d love to hear about your experience with yoga and if you have found that it’s added value to your life. Please comment below.

Love your perspective, Laurie! It’s fun to hear how your journey began with yoga. I’ve been teaching for the last 4 years and while I had practiced some yoga in the video (VHS) world (& there’s my age showing 😊), I wasn’t fully engaged in the benefits of it until my yoga certification and beyond. And of course one can always go deeper. That’s the beauty…it’s always available (even without a mat, an instructor, or the heat) and it will always show up exactly as you need it to if ypu show up willing to receive whatever gift it has to offer in that moment. YOGA IS ALL THAT!

Thanks for sharing! Hugs and love to you.

Kathryn, thanks for your comment and love! 🙂 I’m glad you brought up the depth of yoga and that practitioners can always “go deeper.” It’s this kind of self-regulation that brings the best of yoga to those who make the time to practice and notice the external and internal rewards.

Have become more and more intrigued with yoga and am at a point where I would like to find a really good teacher in the Harrisburg, PA area. There are so many places. How do I go about finding someone who is qualified to give me the guidance I need?

Hi, ML!
If you haven’t found a good teacher yet, check this site. Try to get a few one-to-one lessons to start – if that works for you financially. Then try out some group classes & you’ll find one you like. Even going to a class once a week enables you to practice on your own. The class helps keep you on track and teaches you some new poses and perspectives.
Enjoy yourself!
Laurie

I am an older man who has been teaching yoga for about 7 years. Great article ! Another benefit that many folks miss is the establishment of a regular practice with people you like. When a class begins to form community it is really amazing. Folks come not only to exercise and feel better but to meet up with their friends ( another proven stress reducer). It’s like a spiritual encounter without the religion. We all need something like that.

Agreed, Dave! I lived in a teeny tiny town at one time. But, even though it was small, they had no less than 3 yoga studios and several private practices. It took me some time to find “my tribe.” But, I finally did. Then I moved to a bigger city. You’ll never guess what happened. My yogi of choice also moved to that city shortly after. There are no coincidences. Smiling.