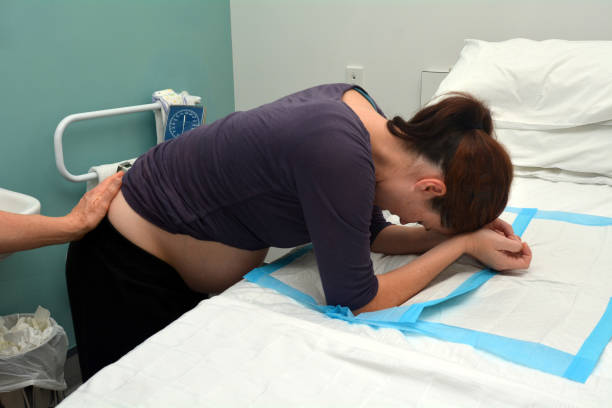 When we undergo an experience that is upsetting or traumatic, people typically have various reactions. Take for example, a person who is in a car accident. It is common for them to have a strong reaction when they think of the accident, begin driving again, or drive past the spot of the accident. The triggers that illicit the traumatic reaction are easily identifiable, as well as frequently avoided (think about people who won’t return to driving on a specific highway following an accident). Imagine yourself as a person who has experienced sexual abuse, and your body becomes one of those “triggers” and a reminder of the traumatic experience. Our brains are designed to protect us and one of the ways this occurs is by dissociation. Dissociation can take many forms: blocking out the experience, feeling disconnected from your body, or resulting in psychological disorders where you lose sense of a cohesive reality. This is an adaptive way people survive serious trauma and can function in the face of unthinkable occurrences like childhood sexual abuse (CSA). Unfortunately, this dissociation from our physical body that survivors may experience, can create unique challenges for future sexual expression, childbirth, and breastfeeding. Dissociation also allows people to temporarily cope with the trauma of sexual abuse, but it is not a substitute for getting help and begin the process of healing from abuse. Failing to confront the health vulnerabilities of childhood sexual abuse can result in very serious health consequences when a survivor gives birth.

In the United States 1 in every 5 women (19.3%) will experience sexual violence during her lifetime. In addition to the emotional and psychological toll that abuse will take on a victim of sexual abuse, physical health problems are common as well.

Some of the physical health problems are:

Obesity and eating disorders are more common in women who have a history of child sexual abuse. Middle-aged women who are sexually abused as children are twice as likely to be obese when compared to their non-abused peers.

Not only do survivors of child sexual abuse have more minor health conditions, they are at greater risk for more serious conditions as well. Adults with a history of child sexual abuse are 30% more likely than their non-abused peers to have a serious medical condition such as diabetes, cancer, heart problems, stroke or hypertension. Failure to practice self-care, prevents many survivors from seeking routine preventative care.

Survivors of Childhood Sexual Abuse (CSA) are more likely to use tobacco and drugs during pregnancy than those who were not abused. Addiction can be rooted in utilization of poor coping strategies designed to minimize the pain of living with sexual abuse trauma. They are also likely to have partners who abuse them emotionally, physically, or sexually. Domestic violence creates a host of long term consequences for pregnant women and their unborn children. All these factors set the stage for a pregnancy that carries a high risk of consequences to the mother and the child.

Childbirth as a Trigger 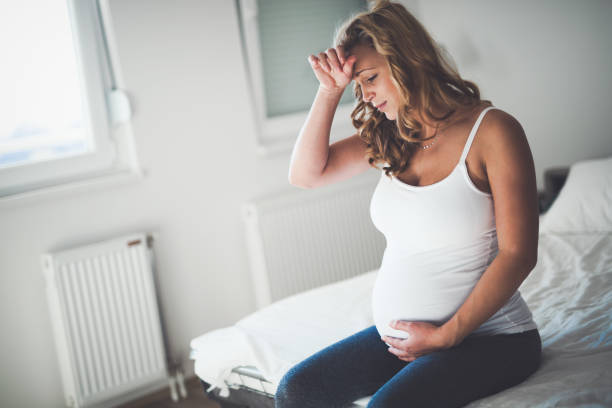 During routine prenatal care, exams and/or exchanges with medical personnel have the potential to trigger memories of abuse, cause flashbacks of the abuse, or unconsciously trigger the fight, flight, or freeze response in sexual abuse survivors. Invasive physical exams, the pain of childbirth, the feel of being out of control, the unequal power dynamics between patient and the doctor can all act as triggers or secondary traumatizers for survivors. Research shows that during pregnancy, a woman who has experienced sexual abuse, will experience higher levels of fear and anxiety than those who were not sexually abused.

Clinical studies show that participating in body therapy in conjunction with traditional psychotherapy reduces dissociation among sexual abuse survivors. Body therapies include massage and body-oriented therapy (a therapy that includes hands-on bodywork designed to allow the patient a higher degree of body awareness). Survivors also report that practicing yoga allows them to feel more connected to their body. Instead of seeing their body as a source of someone else’s pleasure, they can begin to see it as belonging to them. Body Sovereignty is the concept that each person has the right to full control of their body. People who have experienced sexual violation typically struggle to feel of control over their bodies.

According to the US Centers for Disease Control and Prevention (CDC), African American, Native American and Alaska Native women are 2 to 3 times more likely to die from pregnancy-related causes than white women- and this disparity increases with age. The racial disparity has persisted, even grown for years despite frequent calls to improve access to medical care for women of color. 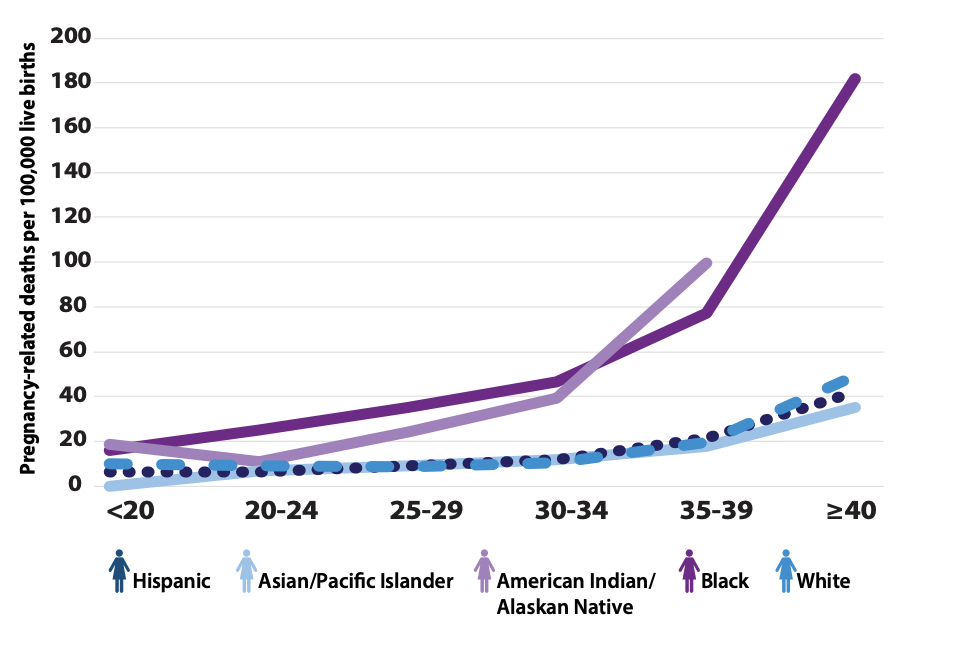 Inequalities increase by age, with the disparity for black and AI/AN women older than 30 years four to five times that of their white counterparts. Among <20 age group, the disparity ratio for black women compared to white women ranged from 1.5  and 4.3 for the 30-34 years age group.

Sexual violence affects Black women at high rates. More than 20 percent of Black women are raped during their lifetimes—a higher share than among women overall.

Survivors of sexual violence face increased adverse obstetric outcomes, especially with marginalized populations. The trauma experienced from sexual assault and abuse has long-lasting effects on women’s ability to fully engage with their bodies need for medical care.  Sexual violence can produce medical consequences including sexually transmitted infections, mental health conditions, including post-traumatic stress disorder and risk of unintended pregnancy in survivors of sexual assault who are of reproductive age. 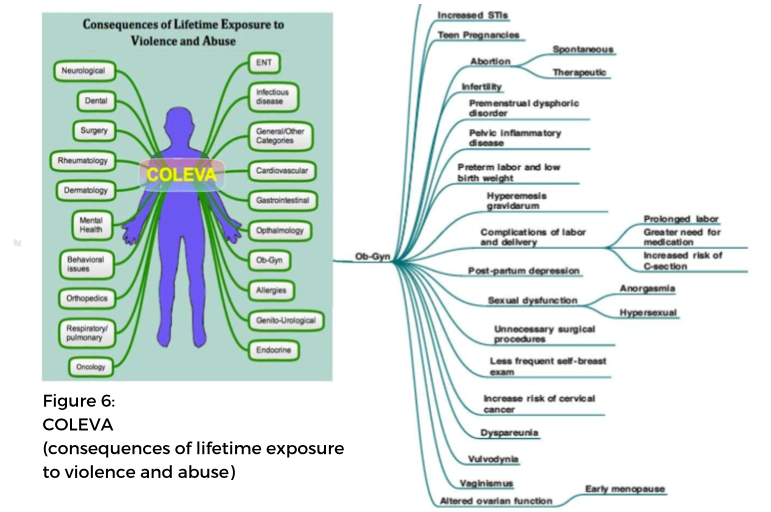 The Consequences are More than Psychological

Survivors of childhood sexual abuse (CSA) are more prone to gynecologic problems, including chronic pelvic pain, dyspareunia (pain in the pelvis before, during, or after intercourse), vaginismus (involuntary contraction of muscles around the opening of the vagina in women), nonspecific vaginitis (inflammation of the vagina that can result in discharge, itching and pain). Other physical health consequences of sexual violence are repeated vaginal and abdominal infections, sleeping problems, digestive problems, fibromyalgia, repeated urinary tract infection, inflammation of the fallopian tube, ectopic pregnancies, ovarian cysts, cervical and ovarian cancer.

Survivors may seek little or no prenatal care. Lack of prenatal care is associated with a 40% increase in the risk of neonatal death.

Studies have linked childhood sexual abuse (CSA) with pre-term birth (PTB). PTB is defined as birth prior to the completion of 37 weeks gestation is the leading cause of neonatal mortality and an increased risk for immediate and long-term health problems. Perhaps related to stress, mothers of infants considered to be born pre-term, have higher incidence of cardiovascular issues later in life than mothers of babies who go full-term. 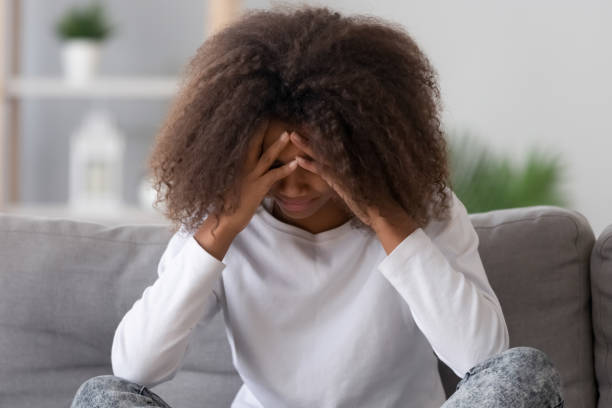 Compared to mothers who have not been sexually abused, mothers with a history of sexual abuse experience more feelings of guilt and have trouble breastfeeding. They have difficulties in their relationship with their body, feeling exposed, uncomfortable and unsafe. According to a 2016 study on birth experiences in adult women with a history of childhood sexual abuse, women after childhood sexual abuse (CSA) reported significantly more negative birth experiences than controls.  They often experience depression, suicidal ideation and post-traumatic stress disorder both during and after birth. Post-Traumatic Stress Disorder (PTSD) can adversely affect the well-being of women and their ability to bond with their infants. Many survivors of sexual abuse already struggle with feelings of shame and inadequacy, and their negative experience of childbirth and inability to bond with their infants can unnecessarily add to their feelings of guilt and shame. Pregnancy and childbirth represent a distinctive part of a woman’s lifecycle that are intrinsically linked to her overall health and well-being throughout her life.

There has been much more awareness about the impact trauma has on health in the last decade. Many providers have realized the value of trauma-informed approaches to care. It is critical that policy makers and providers explore the role sexual trauma plays in the declining maternal mortality rates in the United States, especially among women of color.

I am having trouble finding information about Obstetric care for sexual assault victims. I cant find an OB practice that will allow me to see only female doctors. I live in Charlotte NC, We have lots of OBGYN’s and I felt like we always had excellent medical options in this city.

When I tell of 2 decades of sexual abuse, and being kept as a “play toy” by two different traffickers. Additionally being raped multiple times by both strangers and intimate partners, and I have a child by one of the traffickers…. single mom, homeless… and a complex mental health profile… Every OB office I have talked to said that I would be required to see the males in their office they could not keep me on with only a female practitioner. I stated that during my OB visits I would be OK if a male did a routine check up, lab work, sonogram etc. but it did not want a male performing any internal exams or the delivery. No OBGYN would take me on as a patient simply because I don’t need a strange man inside my body.
so I am 41 And there is no one willing to help me or my baby. I’ve had a difficult pregnancy I’ve been nauseous and throwing up almost every day and have lost a lot of weight. I don’t understand how in this time and in this age of social awareness how not one single doctor or midwife in Charlotte can help me get care without further trauma of a strange man putting his hands inside me. It is very upsetting and distressing to know I can’t get prenatal care unless I consent to new trauma and being touched in places i don’t want by people i dont know. It is hard enough to allow a female OBGYN to perform exams but I have a mental construct for that- plus I know it is super important for my baby and my own health, so I can manage to get through exams with a woman doctor. It is also concerning to see a lack of information online to support women who have been through sexual assault and women who are carrying their rapist’s babies. Often women in those situations don’t have the help or supports in the 1st place.
for some women like myself, the doctor is the only supportive/trusted person.
I feel very strongly it is just not appropriate for a woman was had sexual assault, or a woman who is pregnant from a rape to be denied medical care because she doesn’t want a man to touch her. It is very concerning to see how female OB’s react to my request for only female practitioners.

Are you aware of any studies where the impact of processing sexual abuse during pregnancy and the impacts on the child? My daughter with whom I was pregnant while first processing my CSA, has shown signs of being anti-male, while also recently telling us she is gay. She has not experienced any sexual trauma or abuse from men, but in a sense, I wonder if I transferred this trauma to her during pregnancy.