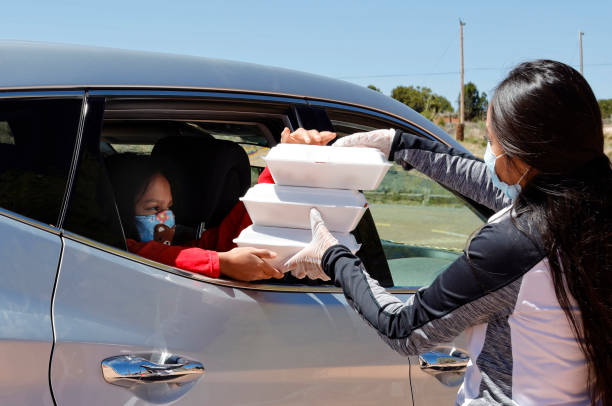 Within days of COVID-19 shutting down the economy, people started flocking to pantries and food banks for support to feed their families. Charity food services around the country continue to work tirelessly to meet the staggering increase in demand. People who have never needed food assistance are now caught in a precarious situation. Millions of people have received their stimulus checks and many of those have bought food and other necessities with those funds. As we already know, $1200 just won’t be enough for the millions of people who have lost their jobs. COVID-19 has abruptly ripped the veil that once disguised our broken economy and unequal society. 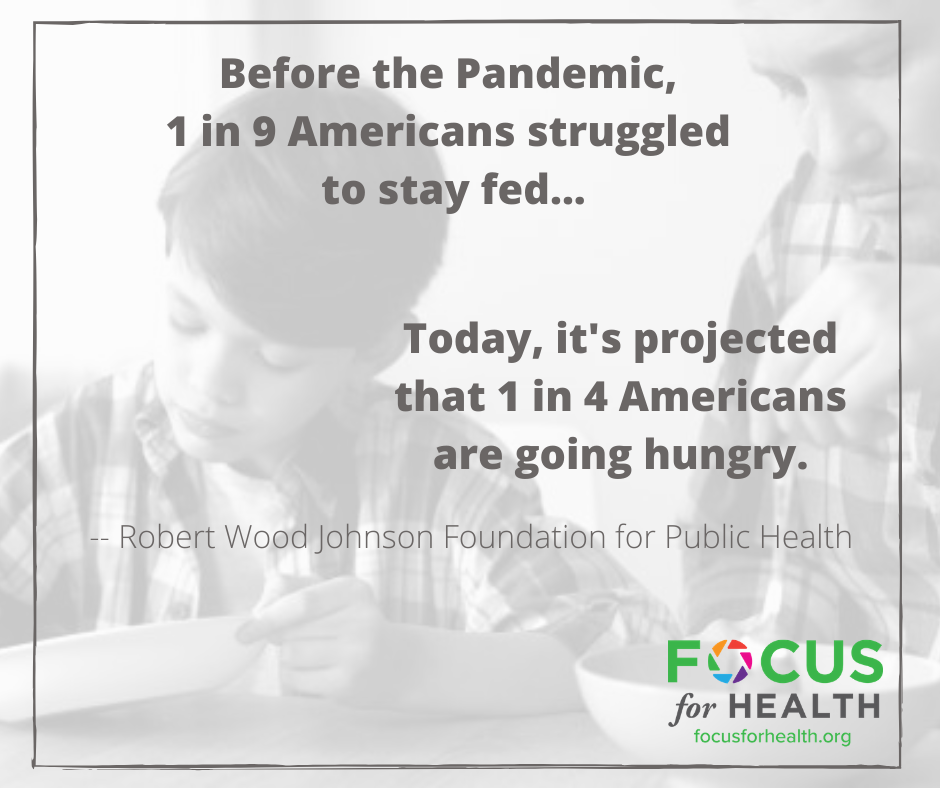 Before the pandemic, 40 million people in the United States were considered food insecure. Nearly 80% of Americans are living paycheck to paycheck, and only 40% would be able to cover a $1000 emergency expense. This alone clearly displays the economic and social issues plaguing the United States. Despite high levels of employment prior to the coronavirus outbreak, over half of the jobs created since the 2008 market crash have been poverty level jobs. Let’s repeat- poverty level jobs. A large sector of society lacks a living wage and is unable to save for an emergency through no fault of their own. This is the reason so many families are in crisis within days or weeks of losing employment.

For most people, the “American Dream” of owning a home, having 2.5 children and a great job with benefits, is just that- a dream. The United States has poor social mobility compared to other developed countries, and has been declining in economic opportunity for decades. If you are born poor, you are likely to stay poor.

Why is it so difficult to get out of poverty? 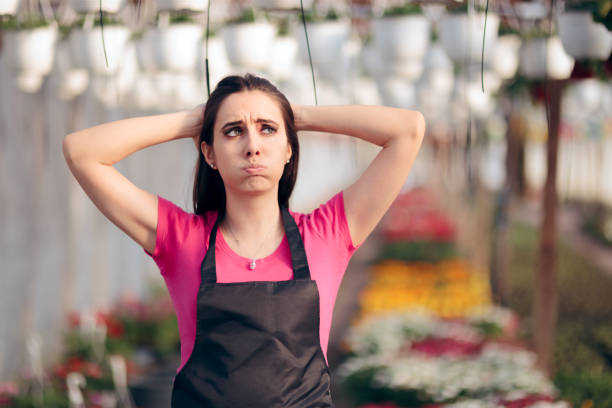 For one, economic inequality has been steadily rising since 1980, when wages began to stagnate and taxes for the highest earners dropped precipitously. According to the Bread for the World Institute, the period between 1979 and 2013 saw economic productivity grow 8 times faster than the pay of a medium income earner. If wage growth had been connected to productivity, the median income would have been $30,000 higher by 2013 and the federal minimum wage would be around $19 per hour. Instead, through tax cuts and other economic advantages, these gains were funneled to the highest income earners, rather than “trickling down” to lower wage workers.

Of course, poverty is not equally distributed. Single mothers, immigrants, communities of color, and other groups outside the mainstream experience poverty and food insecurity at higher rates than the general population. As of the first quarter in 2020, white workers earned about 26% and 35% more than black and Hispanic workers, respectively. Within every racial group, men consistently out earn women. Belonging to more than one disadvantaged group increases the probability of experiencing poverty and food insecurity. Gender and racial wage gaps have been mapped by social scientists for decades, indicating a deeply embedded social issue we have yet to resolve.

Millions of Americans understand that housing, medical care, childcare and education costs are increasing well beyond their financial capability. Businesses exploit this desperation in the form of fees and predatory lending.  The poor have reduced access to wealth building assets such as mortgages and business loans. Student loans have interest rates that make paying them off nearly impossible for someone utilizing an income-based repayment plan. Women and minorities, on average, graduate college with higher debt loads than their white counterparts. Racism, discrimination, unfair business practices, stagnant wages and rising cost of living all conspire to reduce economic mobility for the lower classes.

To struggle financially also means struggling to put food on the table. For millions of Americans, accessing a sufficient amount of nutritious food is a major challenge. As with poverty, black, Hispanic, and Native American communities are more likely to suffer from food insecurity than whites. And women, especially single mothers, are more likely to face food insecurity compared to men.

Anyone who has ever missed a meal knows hunger impacts how we feel physically and emotionally. Popular culture has even coined the term “hangry” with reference to the feelings of anger or frustration a person may feel when they are particularly hungry. It is no surprise then, that children who are food insecure display more behavioral problems, including aggression and anxiety, compared to their food secure peers. Children who are hungry experience higher rates of developmental delays, educational setbacks, and higher hospitalization rates. Food insecurity is also associated with increased rates of high blood pressure, cardiovascular disease, diabetes, obesity and mental health conditions such as depression.

Our nations first line of defense against food insecurity is the Supplemental Nutrition Assistance Program (SNAP), previously referred to as food stamps. Though SNAP improves nutrition, studies have shown that recipients consume less protein, fiber, calcium and other micronutrients than the general population. SNAP benefits provide an average of $1.40 per meal, per person. The national average cost per meal is $3.02, but the cost is even greater in 43% of counties around the country, indicating a clear gap between need and benefits received. When SNAP benefits run out, people struggle the rest of the month and often utilize other services such as local food banks. Even our Congressional leaders can attest to the great difficulty in eating a well-balanced diet on less than $5 dollars per day. And because SNAP eligibility is guided by the federal poverty line, it is estimated that 3 in 10 people who are food insecure do not qualify for governmental nutrition programs.

Increasing SNAP benefits for recipients so they can afford a more nutritious diet may be one solution. But a bold step would be to increase wages across the country so people can afford food and other necessities without government aid. Even though an increase in wages may negatively impact corporate profits, overall economy and job growth has been observed through past wage increases. Instead of maintaining the status quo, which forces people to utilize government aid just to survive, our economy and society would be better off paying a living wage and utilizing nutrition assistance programs as a safety net during crisis situations, be it personal, local or national. 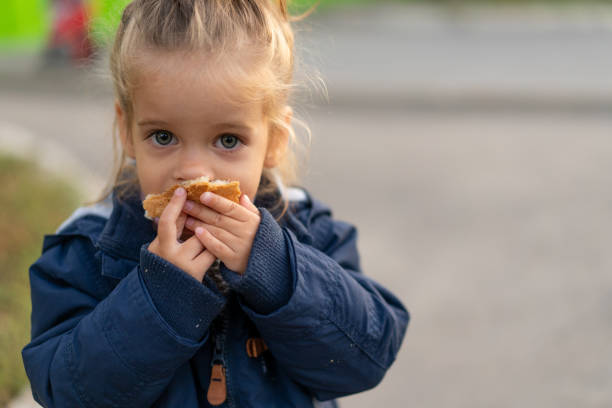 By creating economic opportunity that allows everyone in society to meet their basic needs, access credit and financial tools, save money and accumulate modest wealth, we will not only alleviate hunger and poverty endemic in America, we will be better prepared to withstand future crises. The poor cannot stop being poor, nor can they contribute meaningfully to the overall economy, unless there is a fundamental shift in policies that impact America’s low and moderate-income population. In light of COVID-19, we need to thread economic and social equality into the fabric of American society. The only way to truly end hunger in America is to implement policies that effectively reach low and middle-income families at all times, not only during a pandemic.