In 1969, the House passed a constitutional amendment to establish direct election of the president by a bipartisan vote of 338 to 70. The bill passed the Senate Judiciary Committee by a vote of 11 to 6 and reached the floor in September 1970. There it met a prolonged filibuster from southern senators, who did not want the president to be elected by a popular vote. Therefore, the bill died. Its death was not the result of opposition from small states, however. Instead, it was the issue of race and the political power of the South that had killed reform.

The public has continuously supported abolishing the electoral college. The Gallup Poll reported in 2001 that “there is little question that the American public would prefer to dismantle the Electoral College system and go to a direct popular vote for the presidency.

In January 2013, 63 percent favored doing away with the electoral college. Polls in 2018 showed clear support for direct election of the President. By June, 65 percent of American wanted presidential elections decided by the popular vote, and only 32 percent preferred using the electoral college.

The problem we are facing is simple. Since 1968 approximately 80-90 percent of the black vote has gone to one party. Under the electoral college and with political gerrymandering those votes are diluted.

This is not democratic and it is why if we want to end systematic racism, the electoral college can’t continue.

Check out the Segal Family Foundation and Focus for Health billboard 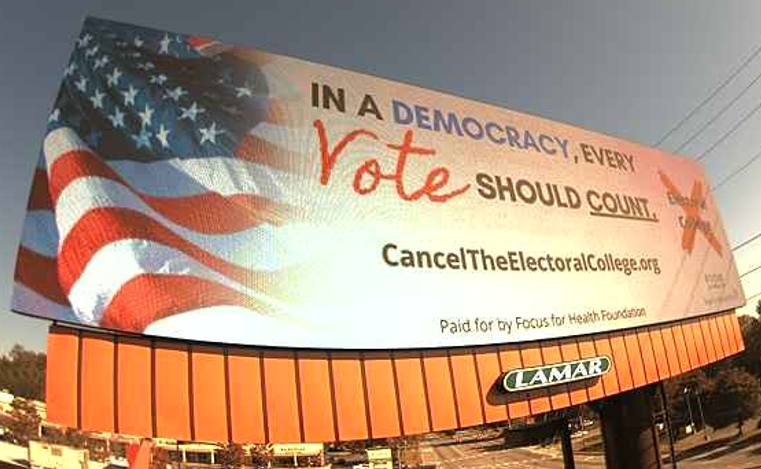