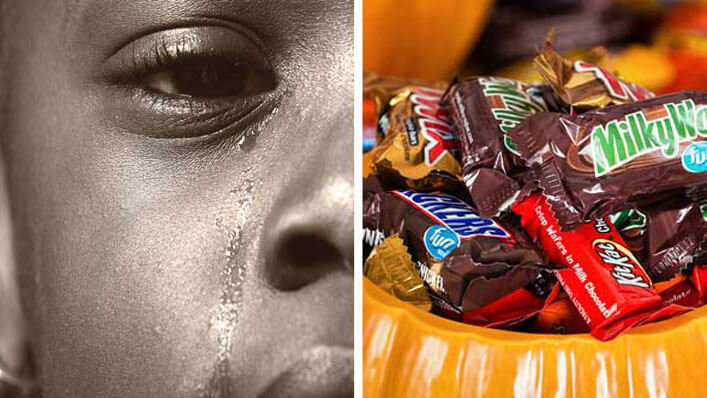 With Halloween rapidly approaching, I pose a question to you: what is the commonality between M&Ms, Milky Way, Swedish Fish, and Sour Patch Kids? One possible answer is that they’re all common Halloween candies, but they are also the brands that contribute to child labor and slavery.

There are an estimated 240 million child laborers globally, many of which are in Africa. Between 2000 and 2004, the worldwide number of slaves decreased, but increased in Africa by 49% in the same period. Over 27 million slaves exist in the world today, 9 million of which are children. There are likely many more who are not considered “slaves” but some other euphemistic title such as an “indentured servant”, who work in dehumanizing conditions for a meager wage, if any at all. 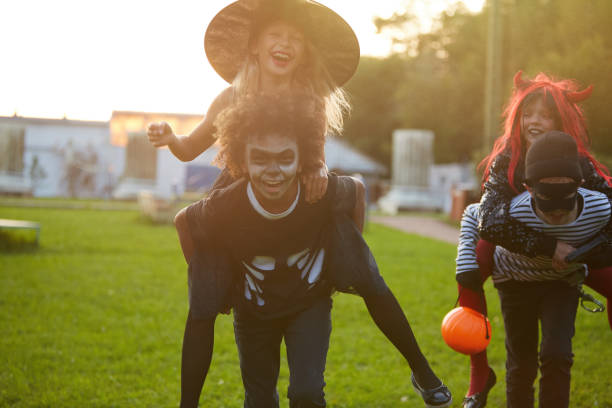 Many of us enjoy chocolate, but it is a gift and a want, not a necessity. Can you imagine the anguish and pain these children, families, and communities go through just for our pieces of candy? Children, being lied to about school and working on farms to pay off family debts. Children, as young as six or seven years old, being given machetes, chainsaws, and other dangerous tools. Children, with nothing more than the clothes on their backs, toiling away for years in fields under the supervision of farmers who often also live in poverty due to the fact that the companies do not value them either. Children, scarred heavily on their hands, feet, and faces, being trafficked into child slavery to provide for their families. This is the reality that comes along with the chocolate that we consume so eagerly, and we wouldn’t dare accept this for our own children.

Inconsistent Supply Chains and Corruption Contribute to The Problem

If you want to really see the scope of the issue, type any candy or confectionery company followed by “child labor” into a Google search and see what you get. None of this is surprising, as top chocolate companies have repeatedly missed 2005, 2008, and 2010 deadlines to rid child labor from their supply chains, and are on track to miss a “conservative” 70% reduction deadline in 2020. What’s more troubling is the fact that the U.S. Customs and Border Protection (CBP) uses withhold release orders (WROs) to ban goods produced with forced labor, which includes child labor. The CBP identified five companies suspected of using forced labor, but the chocolate companies who have outright missed deadlines and cannot guarantee their supply chains are free of child labor skirt consequences for decades. These companies can’t even identify the farms where all their cocoa comes from. Ferrero Group, the company behind Famous Amous, Ferrero Rocher, Nutella, and many other brands, could not guarantee there were no child laborers in their supply chain as of last month. Mars, makers of M&Ms and Milky Way, can only trace 24% of its cocoa back to farms, while the number hovers near 50% for Nestle. These conclusions beg the question: How can these multi-billion dollar companies have no idea about their labor force and their supply chain? How can a company sustain themselves with a heavily fragmented supply chain and a labor force that even high ranking executives are in the dark about? These facts seem to fly in the face of logic, unless you consider that child labor is not viewed as a problem that needs to be solved. 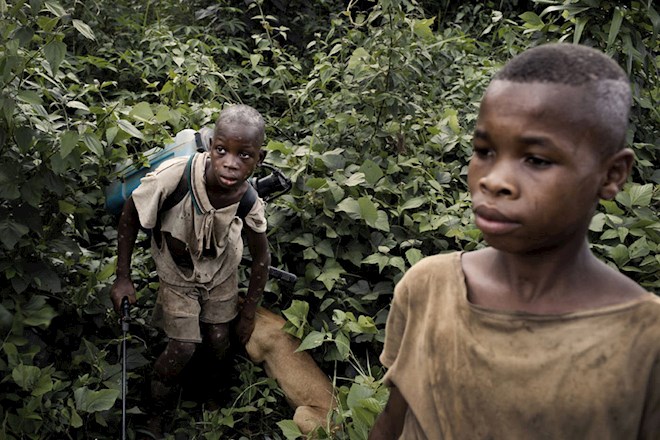 Two children returning to Meagui after working on a cocoa plantation. Richard (left) is carrying a pesticide tank on his back. His whole body is covered with a skin disease (probably Psoriasis). The boys do not attend school. ©Daniel Rosenthal

An article published in the Washington Post in June found that many children are bussed into cocoa fields in the Ivory Coast from impoverished areas, and as one boy notes: “I came here to go to school. I haven’t been to school for five years now.” 60% of the world’s cocoa is produced in the Ivory Coast and Ghana, and the U.S. Department of Labor’s most recent estimates found that nearly 2 million child laborers work in these areas. Given the prior estimates, this number is likely a vast underestimation. The Department of Labor has $20 million worth of projects to address this issue, but once we get into the grantees of these awards, things start to get a little strange: 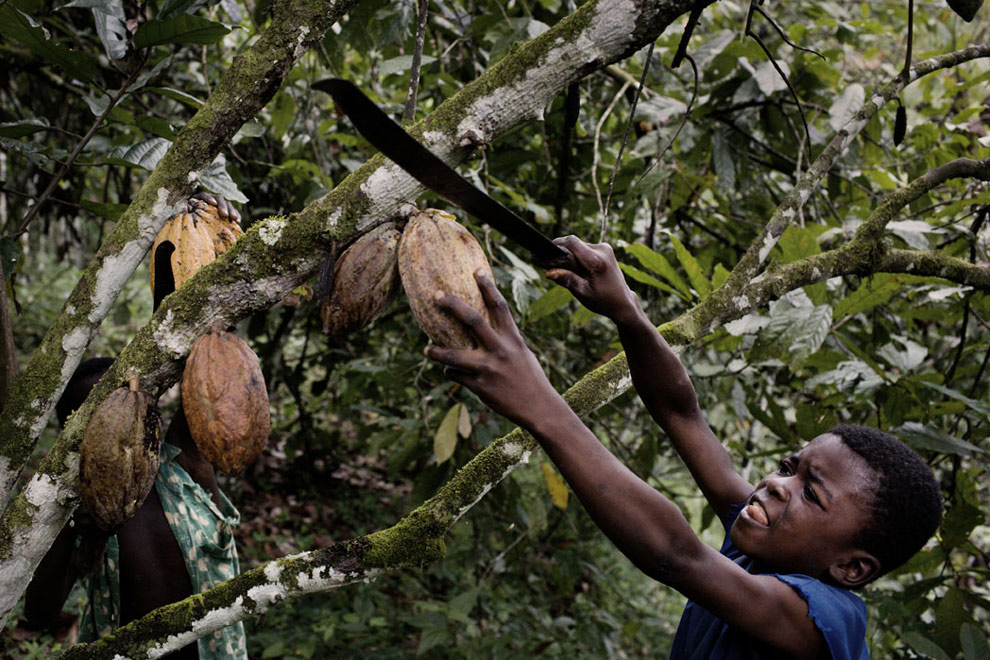 Eleven-year-old Ibra uses a machete tied to a stick to harvest cocoa pods from a tree. ©Daniel Rosenthal

So What Am I Supposed To Do About Child Labor?

Knowing is half the battle, but the other half requires action. It’s time to speak with your finances. Green America, a nonprofit “harnessing economic power to create a socially just and environmentally sustainable society”, produces a yearly “Chocolate Scorecard” that grades companies on their certified cocoa. The Green America scorecard also takes actionable goals and efforts to end deforestation in account as well. The scorecard has a section that also seeks to demystify the certifications and what they mean. 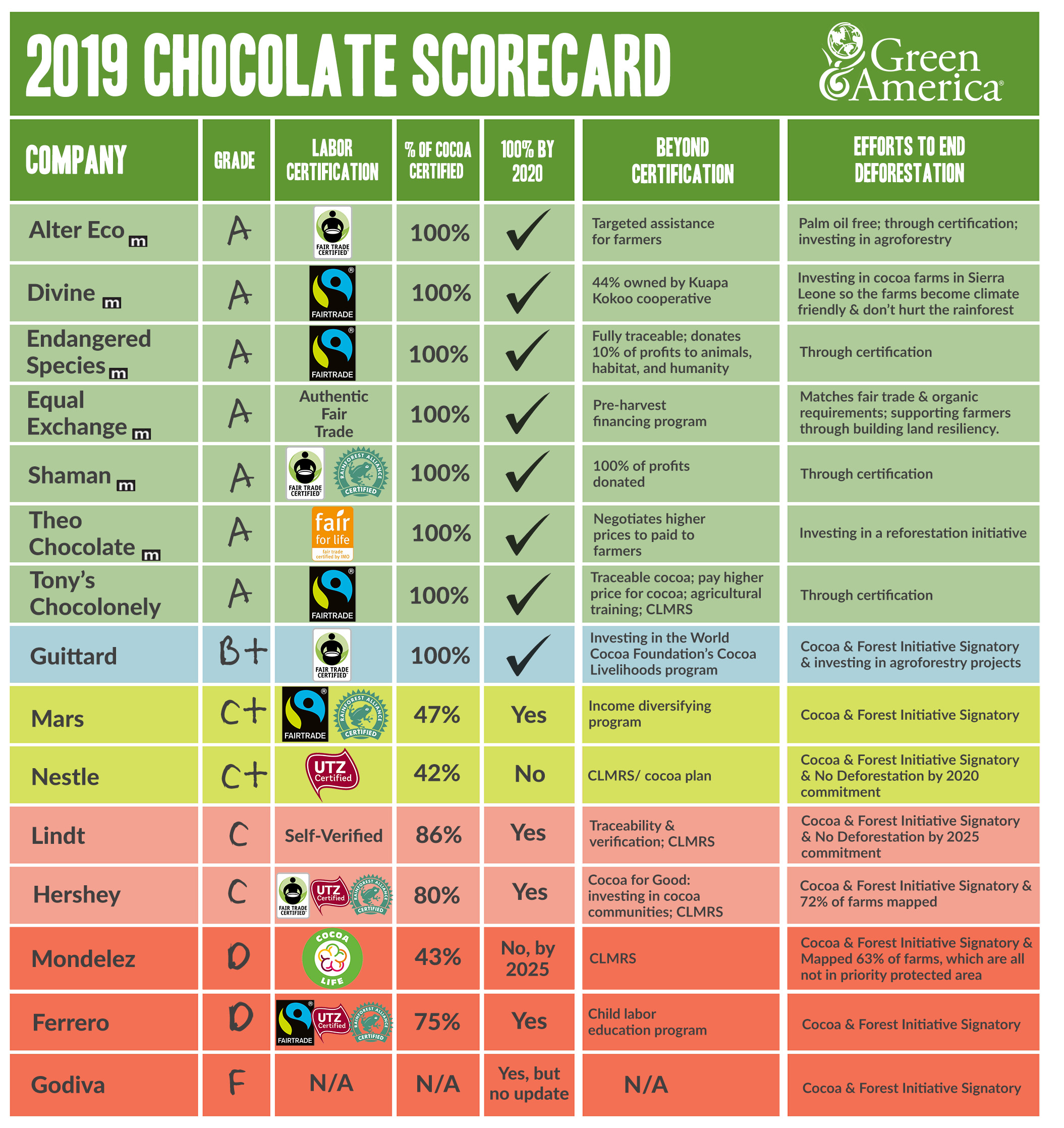 When purchasing candy, seek out “Fairtrade or Fair Trade Certified” candy. Some other popular certifications are IMO Fair For Life and Rainforest Alliance (which typically applies to coffees and teas, but candy as well). 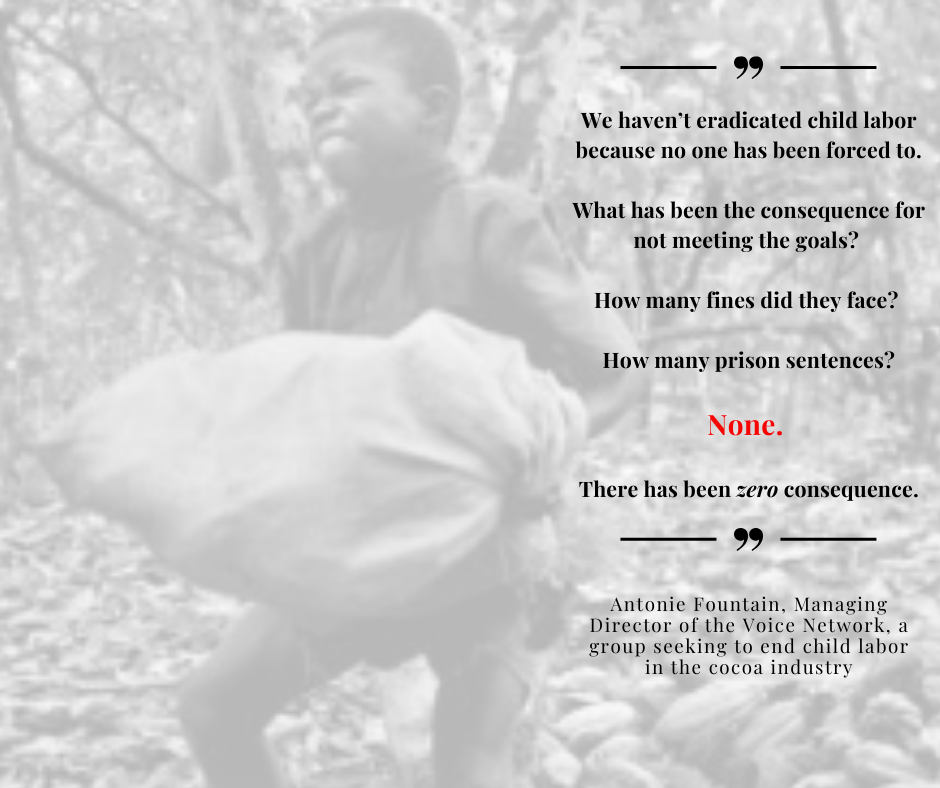 Our children enjoy the sweet and savory flavors of Halloween, while the children of Burkini Faso & Niger rue the day they arrived on the cocoa farms. Ignorance is no longer an excuse for our financial support of companies and conglomerates that use their authority and power to oppress those who provide them with records profits. It is our responsibility to put our money where our mouth is, and to stand up for the values and morals that we claim to hold near and dear. The Food Empowerment Project, along with Green America and many other brands, produce lists of chocolates that are not sourced from Western Africa, which address unethical consumption. If any of us saw the children at a local elementary school working with dangerous tools in grueling conditions for a barely livable wage, we’d be outraged.

As consumers, our money is a form of support.  Buying products from companies that support child slavery is an active endorsement of the practice. If you care about children enough to buy candy to and give it away in your neighborhood but do not care enough to buy from companies that do not support child enslavement, there is a moral implication that American children are more valuable to you than children from low-income countries. Many of these child slaves will never see their families again. 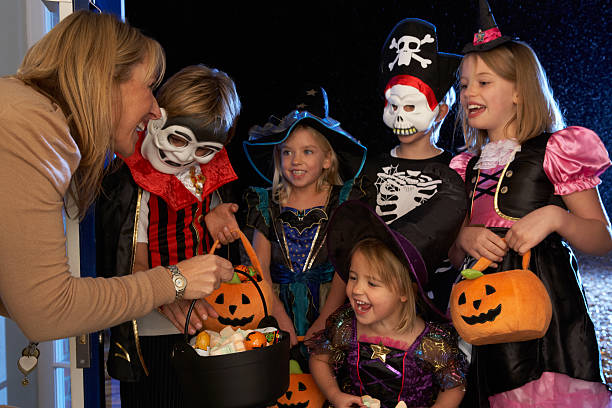 Companies are not voluntarily changing their practices and they are actively breaking pledges to end child enslavement. As concerned consumers, our only recourse is to harness our collective purchasing power and boycott all companies that support child slavery. It is easy to remain detached from this issue as it is so removed from our everyday life. Perhaps, if companies were required to put images on their products to remind consumers of the realities of chocolate production, the industry would experience the transformation it should.

Do you have information on Costco’s Kirkland brand chocolate? The Costco website states they have a global supplier Code of Conduct, which prohibits human rights abuses in their supply chain. They mention more against illegal child labor and slave labor and about evaluating compliance. However, the Kirkland packaging only references “sustainability.”

They source their chocolate from a variety of suppliers. Not all of their suppliers are documented as fair trade companies, so there is no guarantee that no child labor is used.