The general public may not be aware of the impact quite yet, but the free, evidence-based content FFH (and other reputable organizations) publishes to keep all people informed about their health is being heavily censored online, as well as on multiple social media platforms, in a concerted censorship campaign.

For instance, our monthly newsletters with MailChimp have been suppressed if we include any articles related to vaccine research or safety. Facebook article posts are denied when we try to Boost them. And we preemptively disabled our own Pinterest account in early 2019, because Pinterest had suddenly removed the accounts of so many of our peer organizations, without warning, in 2018.

Then, there’s Google. Starting in April of 2018, the $40K Ad Grant Google had gifted to FFH was suspended. After some modifications it went back up, but we were informed that the program was “discontinued” in June, and they demoted us to a $10K grant. This grant ran semi-smoothly until recently, when it was pulled in May 2019 and our ads were deemed “dangerous or derogatory content” or “restricted medical content or drug names” for topics like Maternal Health, Breastfeeding, the Flu Shot, and the Opioid Crisis. At that time, both our paid ads and our ad grant ads were taken down. 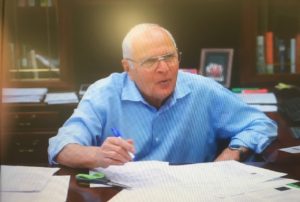 With this latest attack by Google, all of these smaller slights rolled quickly into a clear picture of censorship, a battle that our founder, Barry Segal, is ready to take on:

Per the attached I see where you don’t approve of our content on the Focus for Health website.
The Focus for Health website clearly qualifies that we are not doctors, and to discuss and health issues with your physician. All the medical statistics that we post are appropriately sourced from reputable medical journals, medical associations, and federal health agencies.

Obviously, you can do what you want. I will donate my 1461 shares of Google to Focus for Health (to avoid taxes) and they can use the money to continue the battle for what I think is right.
Vulnerable children should not be carelessly vaccinated, especially if it can only endanger their future. Build up their immune system, delay a little, avoid catch-up vaccinations, and vaccinate one at a time. This is common sense and consistent with vaccine schedules over the developed world.

We will continue to fight the battle to give the lower classes more opportunities. The wealthy pass laws so they can increase their fortunes and the lower classes lose out, and the gap becomes wider. These cause major health issues that must be dealt with.

Like it or not, Focus for Health intends to go after institutions that protect sexual abusers. If a minority person sells drugs, they can do 6 years in jail – but if a 70 year old rabbi rapes an 8 year old boy, his institution protects him, thereby becoming an accomplice.

We can’t let organizations police themselves. Whether it applies to child sex abuse or vaccine safety. Asking for strong regulations and more transparency is what is called for, NOT censoring the conversation.

Attached is a quote from “Not My Boy” by Rodney Peete, and I have personally talked to people that have heard hundreds of these cases who believe their child’s developmental regression is the result of vaccine injury.

Holly got even more concerned when she found out that they might be receiving more than just the MMR vaccine. She wanted to know what was in the shots and how many of them there would be. She remembers the nurse looked at her like she was psycho mommy, and told her to relax while she took R.J. in to be weighed. Holly was sitting in another examining room holding on to Ryan, when she heard R.J. screaming, “No! Mommy!” She ran to R.J. and saw that the nurse had given him the MMR plus the second hepatitis B and the polio vaccines. The nurse said that it usually was easier with the parents out of the room. Maybe it was easier for the nurse, but for the next eight years, nothing about R.J. would be easy for our family.

At home that night, R.J. had a terrible fever and started shaking violently, just short of something like a seizure. Holly called the pediatrician to ask him what could have caused this. Should we take R.J. to the hospital? The doctor was unruffled and told us that it was not a reaction to the shots. He recommended that we give R.J. some Tylenol to help him with the fever and he promised that R.J. would be fine. R.J. had a terrible reaction to the Tylenol and we rushed him to the emergency room late that night. We believe he went into some kind of toxic overload shock. After that, we didn’t hear the words “Mommy” or “No” for about four years.

I know there is a lot of controversy in the medical community about what causes autism. Researchers and doctors reject parents’ claim that vaccines, particularly the MMR, can trigger the disorder. Many parents believe that the mercury-based chemical thimerosal, which is used as a preservative in vaccines, reacts dramatically in the immature immune systems of some children and triggers autism. In the last decade, the number of vaccinations has increased dramatically; now kids get more than thirty different shots, most of them before the time they reach eighteen months.

We also have a current billboard in South Orange, NJ calling out the institutions covering up abuse.

Do what you want, but you won’t stop us.

P.S. At about 7:00 this morning, I saw CNBC discussing the opioid crisis. You and people like you blindly support Big Pharma’s efforts. The discussion was – we are 5% of the world’s population, and we take 80% of the opioids. Thousands have died from this while Purdue made fortunes… In 15 years, only 3 people have died from the Measles, two of those with other complications.

Awesome. Thank you Barry for keeping up the fight. They are messing with the wrong organization!!!