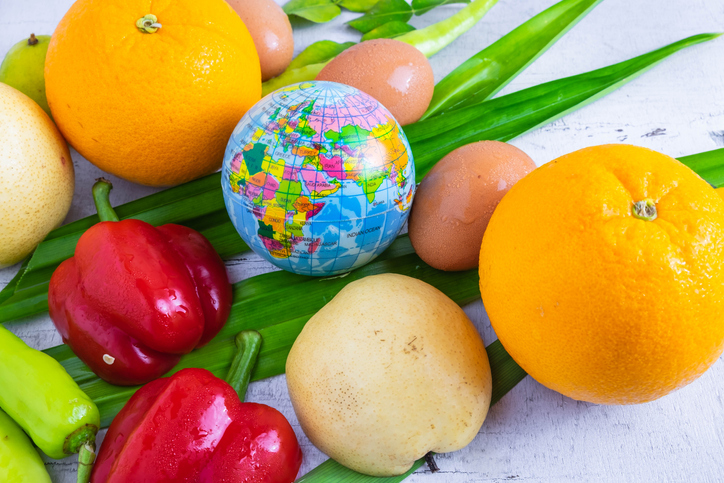 Eighty five percent of processed foods sold in the US are either genetically modified, or loaded with unsafe chemical additives, including probable carcinogens that are linked to poor health and environmental decline. The ubiquity if additives and modifications, combined with the uncertainty of the truth in food labeling, provides a dilemma for even the most conscientious consumer. Given the toxic nature of the American food supply, many citizens are demanding US food labeling laws that will allow them to make better food choices for themselves and their families. If a food is clearly labeled as organic, GMO free, certified humane, fair trade, or agriculturally sustainable, consumers can select a product that reflects their values and beliefs.

Our food choices, both what we eat and how our food is produced, have become highly politicized issues and have implication for public and environmental health. The good news is that dietary changes that are good for personal health are also good for the health of the planet. Here are some of the dietary changes a consumer can make to help the environment: 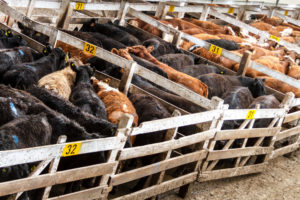 Livestock consume a huge amount of grain, water, and they take up a lot of space. Researchers at the University of Oxford found that cutting meat and dairy products from your diet could reduce an individual’s carbon footprint from food by up to 73%. Scientist have even come up with a diet called the “planetary health diet” and believe that if it is widely followed it could reduce greenhouse gas emissions by 66% by 2050! The primary focus of this “diet” is a diet comprised mostly of fruits, vegetables, nuts, whole grains, plant proteins (beans, lentils), unsaturated plant oils, modest amounts of meat and dairy, and some added sugars and starchy vegetables.

This is very different that the Standard American Diet (SAD) that focuses disproportionately on red and processed meats, sugar, trans-fats and carbohydrates. There is not enough land to produce enough meat to keep up with the current American consumption. Diets high in fruit and vegetables, as well as plant-based proteins, require less land; they also create fewer greenhouse gas emissions and demand less energy.

For those of us who are not ready to embrace a vegan diet, try a small change to get started: Meatless Mondays, substitute a non-diary milk for cow’s milk, use meat sparingly, like a condiment and not the main feature of the meal, or go Vegan before 6 pm! Research has consistently demonstrated benefits of eating a vegetarian diet: lower body mass index, lower blood pressure, reduced risks of heart disease, diabetes, and cancer, and longer life. Less meat is good for your health and good for the planet.

Genetically Engineered crops are responsible for increasing herbicide use by some 527 million pounds in the U.S. over the first 16 years of their commercial use. These chemicals seep into the soil and run off into our water supply. The Food and Agriculture Organization of the United Nations first expressed concern about the food chain effects of glyphosate in 2005. Research demonstrated that glyphosate can be detected in water and soil for several months, maybe even years after application. Glyphosate can be found in all parts of the food web and researchers have linked it to changes in metabolism, growth, behavior, and reproduction of certain fish, mollusks and insects.

There is mixed opinion about the benefits of GMO’s in the food supply and no likelihood of their elimination in America anytime soon. The movement towards mandatory labeling of GMO’s will, at least, allow consumers more ease in avoiding their use.

When shopping, look for the Non-GMO Project label. Though the labeling law is not fully in effect until 2020, many companies are using the label now.  In general, the crops most likely to use GMO’s are alfalfa, canola, corn (except popcorn), cotton, papaya, soy, sugar beet, zucchini/yellow summer squash, plus GMO salmon is coming soon. High fructose corn syrup (HFCS) contains corn so it is most likely genetically modified, as well as being overly represented in processed foods. Avoiding highly processed foods is a good way to stay clear of GMO’s.

Research has consistently demonstrated the serious health risks associated with genetically modified foods including infertility, immune problems, accelerated aging, faulty insulin regulation, and changes in major organs, and in the gastrointestinal system.  Concern for the health risks associated with foods that are treated with pesticides and chemicals has required Taco Bell to add the following on their website:

“⚠ WARNING Certain foods and beverages sold or served here can expose you to chemicals including acrylamide in many fried or baked foods, and mercury in fish, which are known to the State of California to cause cancer and birth defects or other reproductive harm”.

If you replace your daily 16 oz Coca-Cola with water you reduce your annual calorie intake by 70,080 calories or about 20 pounds in a year. Research has shown 12 out of 12 soft drink tested contained traces of toxic pesticides and insecticides. 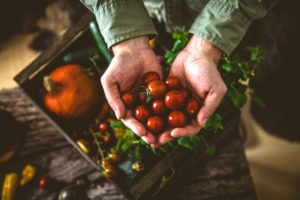 It is estimated that the food in the United States travel about 1,500 miles to get from farm (or in the case of processed foods, factory) to plate. Long distance travel relies on fossil fuels and generates high quantities of carbon dioxide emissions.  These are the main culprits associated with climate change. In order to prepare the food to travel without perishing, fruits are picked while still unripe and then gassed to “ripen” after transport, processed using chemical preservatives,  or treated by irradiation methods. Scientists also look to genetic engineering to ensure produce can stay fresh longer for travel.

To be clear, this is not a simple supply and demand system where places that can’t grow lemons must have them imported from a warmer climate. Food is shipped around multiple times so food manufacturers can pay the lowest labor costs for processing. Cod caught off the coast of Norway is shipped to China to be turned into filets, then shipped back to Norway for sale. Half of Europe’s peas are grown and packaged in Kenya. Though the food company saves money by shipping their products across the globe (under longstanding trade agreements, fuel for international freight carried by sea and air is not taxed)  there is a very real impact to the planet. Distance is not always the only indicator of a food’s carbon footprint. How a food traveled (ship, plane, train, or truck) also has an impact.

Eating foods produced close to your home and in-season are the best ways to eat in tune with the environment and nature. Though most produce is available at your market year-round, there is a season where it is produced in each region. 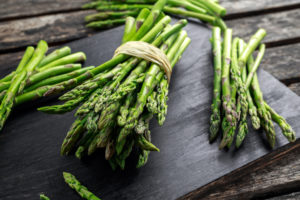 For example, if you live in the Northeastern region of the USA and you see asparagus on the grocery store shelf in October, it is not local. Chances are that the asparagus is from China or Peru. The asparagus raised in China and Peru is not bred for taste, but for its ability to travel without perishing.

Local food has more nutrients. Due to less time in transit, the nutrient value does not decrease as much as it does when it sits longer.  Also, 80% of all commercially available produce is waxed (The FDA has approved several waxes made from shellacs, paraffins, palm oil derivatives, and synthetic resins) with the same substance you use to wax your kitchen floor. Adding wax to produce can prevent it from spoiling while being shipped, but it can trap fungicides and pesticides on the product. 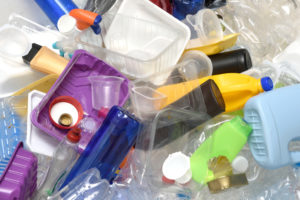 Obviously, producing less trash is in the best interest of the environment. When packaging can be recycled that is beneficial but recycling itself is a process that uses energy resources. There is no substitute for using packaging materials that biodegrade or are reusable. The most obvious examples are buying a glass or stainless-steel water bottle, using cloth grocery bags to replace disposable paper or plastic bags, purchasing a stainless-steel straw to replace disposable plastic or cardboard straws, and bringing reusable food storage containers to a store that sells bulk foods as an alternative to any packaging.

A supermarket in Thailand decided to reduce plastic packaging by wrapping their produce in banana leaves, which are biodegradable and have minimal environmental impact when being disposed of.

There are also health benefits from staying away from food stored in plastics. Some types of plastic water bottles contain chemicals that may leach into your drinking water. Bisphenol A, or BPA, is one of the most commonly cited culprits, and is found in hard plastic bottles marked with plastic code “7.” Other plastics also pose a potential health threat. Many countries have banned use of BPA’s due to health concerns, but they are still widely used in the USA.

A simple step you can take for your personal health and the health of the planet is purchasing reusable food storage containers, water and baby bottles, and travel coffee mugs.

FUN FACT: Every hour, Americans throw away 2,500,000 plastic bottles. America has a 23% recycling rate. The average time for a plastic bottle to degrade is 450 years. 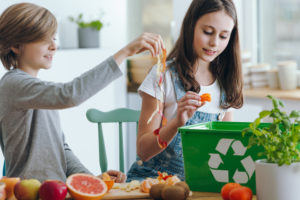 One-third of the food that is produced in the world is lost or wasted for one reason or the other. Food waste that ends up in landfills produces a large amount of methane (a more powerful greenhouse gas than even CO2) which is implicated in global warming and climate change. Therefore, reducing food waste is good for the planet and for our budgets! Purchasing only what we plan to eat, appropriately storing foods, and composting that which we don’t eat is the best way to keep food from decomposing in landfills.

There is no better use to compost than in one’s own garden. By starting a small garden, you can use your compost and grow fruits, vegetables, and herbs for personal use.  Your plants will be readily available, package-free, and can be picked right before using to ensure the highest amount of nutrition.

Buying organic was not included on this list intentionally. There are well documented health benefits to eating food produced by organic means, but there is conflicting research about the benefits to the planet and limitations to the large-scale implementation of organic farming. Also, many farmers, who are very committed to safe environmental practices cannot afford the certification, but use methods allowable, or safer, than the organic certification requires.

Go out to your local farmer’s market and ask your farmer about their farming practices in terms of chemical use, environmental practices, or even ethical treatment of their livestock. Once we understand the issues related to food production and the interplay between our physical health and the health of the planet, we can make choices that are best for both.