Additives to food are a fundamental part of the food supply. They prevent spoilage, enhance taste, appearance, texture, and palatability, as well as serve as a component of food packaging. While most food additives are safe, several of today’s commonly used food additives have been identified as having serious toxic effects on human health. It may be shocking for some to learn that many food additives banned in other countries are still used in the United States. Toxicological analyses of these substances generally rely on their direct toxic effects on target organs like the liver and kidney. Much less attention is paid to the effect of these compounds on cells of the immune system, which is relevant given that obesity and metabolic dysregulation have a strong immune-mediated component. Although highly processed foods loaded with sugars, fats, and salt have been associated with heart disease, stroke, diabetes, obesity, and metabolic syndrome, mounting evidence suggests that banned food additives may also be important contributors to immune system dysfunction resulting in poor health.

What are some of these banned additives and their health risks? 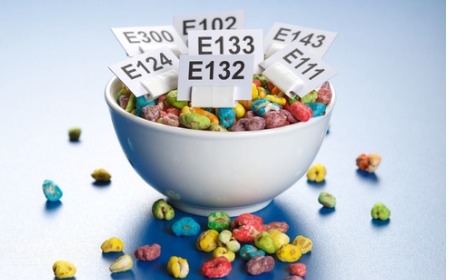 There are 9 certified color additives approved by the FDA for use in the United States, among them Blue No. 1, Red No. 40, Yellow No. 5 and Yellow No. 6. These colors are used to enhance the appearance of cereals, snack foods, beverages, dessert powders, crackers, sauces, beverages, and many other products. The consuming public is largely unaware that artificial food dyes are made from petroleum and have been banned in many other countries.

Blue No.1 is banned in Germany, France, and Switzerland, but is often found in U.S cereals and ice cream. Researchers have associated Blue No.1 with hyperactivity, allergies, and aggressiveness in children.

Red No.40 is one of the most commonly used artificial food dyes in the U.S. It is found in candies, cheeses, meats, beverages, and many other goods, but was banned in Switzerland and U.K due to health concerns. This additive has been shown to decrease concentration and increase hyperactivity in children.

Yellow No.5 is banned in Norway and Finland but is still widely used in the United States. Studies on Yellow No.5 show that it induces genetic damage. Yellow No.6 has also been banned in Norway and is being phased out by the European Union. It is still being used in the United States even though this additive has been associated with negative side effects like allergies, runny nose, tumors in animals, and hyperactivity.

Interestingly, some US companies like Mars and McDonald’s continue to use dyes for their products sold in the States, while distributing safer, cleaner food to their consumers in Europe. For example, McDonald’s strawberry sundae in the US contains Red No.40, while the same strawberry sundae in Europe gets its color from strawberries naturally. Similarly, M&Ms sold in Europe use natural coloring, while M&Ms sold in the US contain food dyes.

Manufacturers like to use dyes because they are more stable, cheaper, and brighter than naturally colored foods. Unfortunately, the United States regulatory agencies continue to allow this practice.

The European Union, Japan, Australia and New Zealand have all banned rBGH. A quote from the United States Food and Drug Administration says:

The “extensive review” of data to support the safety and effectiveness of rBGH that is mentioned above was only done in rodents. The analysis was based on a 90-day rat oral toxicity study, and many argue that possible adverse health effects of Posilac were not addressed. The FDA claimed that long-term studies were not necessary for assessing the safety of rBGH because BGH is biologically inactive in humans, even if injected. While this may be true, rBGH milk is supercharged with high levels of a natural growth factor (IGF-1), which is readily absorbed through the gut. Several studies have found that IGF-1 levels, even at the high end of normal range, may influence the development of prostate, breast, and colorectal cancers and tumors, prompting many other countries to institute the ban.

Ractopamine is fed to pigs, cattle, and turkeys to cause rapid weight gain. It is banned in the European Union and Mainland China. On November 6th, 2014, the Center for Food Safety, the Center for Biological Diversity, and Sierra Club filed a lawsuit against the U.S Food and Drug Administration for approving several controversial animal drugs based on ractopamine.

Today, ractopamine is used in the food production process without fully examining how these products affect people, animals, or the environment.

The effects of ractopamine in humans has not been well studied. The drug’s primary human health study, conducted on just six healthy men, caused heart palpitations in 3 of the participants, and side effects were severe enough that one of them had to be withdrawn from the study. Apart from affecting the cardiovascular system, ractopamine is also known to cause chromosomal abnormalities and behavioral changes.

The use of arsenic as an additive has been banned in the European Union. This element is found in the environment as a naturally occurring substance but can be a contaminant found in water, air, soil, and food. Published scientific reports have indicated that organic arsenic, a less toxic form of arsenic and the form present in 3-Nitro (Roxarsone), an approved animal drug, could transform into inorganic arsenic. Roxarsone has enabled poultry producers to increase production and lower costs. The arsenic-based additive is used to promote growth, kill parasites, and improve pigmentation of the meat. The chicken excretes most of the arsenic, but some ends up in the meat that is ingested by humans.

Potassium bromate is banned in Canada, China and the European Union. It is used in the United States to strengthen baking dough and to allow higher rising. When potassium bromate is properly used in bread making, it is completely used up, converting it to a harmless bromide ion during baking. However, when too much is used, or when the bread is not baked thoroughly, residual amounts will remain, which may be harmful when consumed.

Potassium bromate is classified as a category 2B carcinogen by the International Agency for Research on Cancer (IARC) and has been linked to cancer, gastrointestinal discomfort, thyroid complications, and kidney disease.

Olestra is a fat substitute that adds no calories, fat, or cholesterol to products. It is used in the preparation of potato chips and other high fat foods, thereby lowering their fat content. Olestra was banned in the U.K and Canada because it was found to reduce the body’s ability to absorb essential vitamins. Fat soluble vitamins A, D, E and K normally bind to fats in the intestines. When the body absorbs the fats, vitamins are absorbed too. The same vitamins stick to olestra, and instead of being taken up by the body, they are excreted. Olestra can cause digestive problems and is also not healthy for the heart.

Azodicarbamide is banned in the U.K, Australia and the European Union. In the United States, it is used as a whitening agent in cereal flour and as a dough conditioner in baking, but it is also used in making flooring and yoga mats. Azodicarbamide causes breathing difficulties, asthma, and allergic reactions in some people.

America’s Health is Falling Behind

The United States has witnessed an alarming increase in cases of neurological disorders, obesity, allergies, cancers, GI disorders, cardiovascular disease, and asthma. This country’s life expectancy and infant mortality rates fall far short of what should be expected in a nation that spends more than double what other developed nations do on health care.

In recent years, much attention has been paid to the amount of fats and sugars present in modern processed food and the typical American’s appetite for it. Although the detrimental effects of fats and sugars are undeniable, the influence of additives in our food – allowed by the United States FDA but forbidden in peer nations with better health outcomes – has not been discussed enough. Until our government forces U.S. food distributors to supply the same healthy food provided overseas to its own people, our nation’s health may continue to suffer.

The public needs facts like these making them realize how people are being duped by our well paid government individuals who unfortunately and it is well known, do take bribes in one form or another and most departments have no oversight controls! Enabling them to submit and receive monies well over their needs so much so they are able to well arm themselves including the needed ammunition! They are all liars! Thieves. What is beyond my understanding is that they do not seem to realize and understand that they are also harming themselves as well as their families and friends! Idiots! We need many more responsible and knowledgeable people reporting loudly and clearly over and over again to get it into their selfish thick heads what is being done to them! Their greed for freebies seem to overshadow valuable health information to avoid self destruction, which we have been doing for quite some time.

Unbelievable that we’re the foremost country in technology and medical advancements, yet we allow the major food manufacturers to stuff any fillers they want into their products to poison the American people.

I read that some of these food dyes contain Aluminum.

Very good article that should be published in major newspapers, tv ads and on billboards