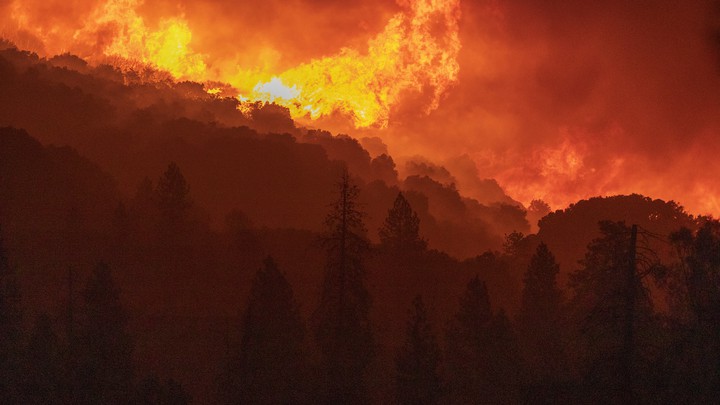 In a speech yesterday, Joe Biden condemned Donald Trump’s handling of the wildfires devastating the American West and pledged to “put our nation on the road to net-zero emissions by no later than 2050.” That’s good news. But it was Biden’s first speech on the subject, even though California, Oregon, and Washington State declared states of emergency almost a month ago. He still hasn’t visited the devastation.

Become a subscriber and receive unlimited access to all of our journalism, plus The Atlantic’s new book examining a country in chaos.

Unlike Trump, Biden hasn’t been slow to address the wildfires because he doubts climate change. As he mentioned in his speech, he’s laid out a more ambitious agenda to tackle it than any other presidential nominee in American history. He’s been slow to address the fires because he’s obeying the dictates of the Electoral College, an institution that is bad not only for American democracy, but for American survival.

Twice in the past 20 years, the Electoral College has installed presidents who garnered fewer votes than their opponent. This year, according to Nate Silver of FiveThirtyEight, Trump could lose the popular vote by three to four percentage points and still have a one-in-four chance of winning reelection—which would lead many Americans to ask, understandably, whether they actually live in a democracy.

That’s bad enough. But the Electoral College also undermines the fight against climate change. If every additional vote in California, Oregon, and Washington—which between them boast roughly 50 million people—mattered as much as every additional vote in a swing state, Biden might have spent the past few weeks touring the West Coast and explaining how his plans can save its residents from a climate apocalypse that threatens to make their home unlivable.

But the Electoral College rules that out. Biden has no incentive to run up his margin in three reliably blue states. Instead, he’s singularly focused on purple ones in the Midwest. So far this month, he’s visited Michigan, Wisconsin, and Pennsylvania, and he’s headed to Minnesota next week. Conventional wisdom holds that in a Midwest built on fossil fuels and heavy industry, focusing on climate change is politically risky. In January, The New York Times described “fracking”—an environmentally damaging process that extracts natural gas from shale—as the swing issue that could win Pennsylvania. And since clinching the Democratic nomination, Biden has been furiously refuting Republican claims that he wants to ban fracking.

In Pennsylvania and Wisconsin, the conservative Club for Growth has run ads attacking his running mate, Kamala Harris, for supporting the “radical Green New Deal, eliminating 10 million oil and gas jobs.” And when Biden gave a major economic speech last Wednesday in Warren, Michigan, he mentioned electric vehicles but never uttered the word climate. As the political strategist Dan Schnur recently told the Associated Press, “The Biden campaign understands that a full embrace of an aggressive climate-change agenda could create problems for them in [the] Upper Midwest.”

Biden’s caution might or might not help him get elected. But it will make it harder for him to take dramatic action on climate if he does, because he won’t be able to credibly claim a popular mandate. Republicans will insist that Biden’s victory reflects not an embrace of progressive policies by the electorate but merely a sourness over the bad economy, the pandemic, and Trump’s divisive brand of politics. And, on climate, Biden won’t have a strong retort, because he hasn’t emphasized the issue on the stump. Because Barack Obama campaigned relentlessly on health care in 2008, he found it easier to persevere when the Affordable Care Act met congressional opposition in 2009. Biden is not laying the groundwork for the same kind of fortitude on climate change.

This is the problem with an electoral system that allows presidential candidates to ignore most of America’s voters. Sometimes the Americans being ignored are facing problems that presidential candidates desperately need to prioritize. By the time Pennsylvania, Michigan, and Wisconsin face climate emergencies that rival those currently afflicting California, Oregon, and Washington, the problem may be too far along for anyone to fix.

We want to hear what you think about this article. Submit a letter to the editor or write to letters@theatlantic.com.

PETER BEINART is a contributing writer at The Atlantic and a professor of journalism and political science at the City University of New York.