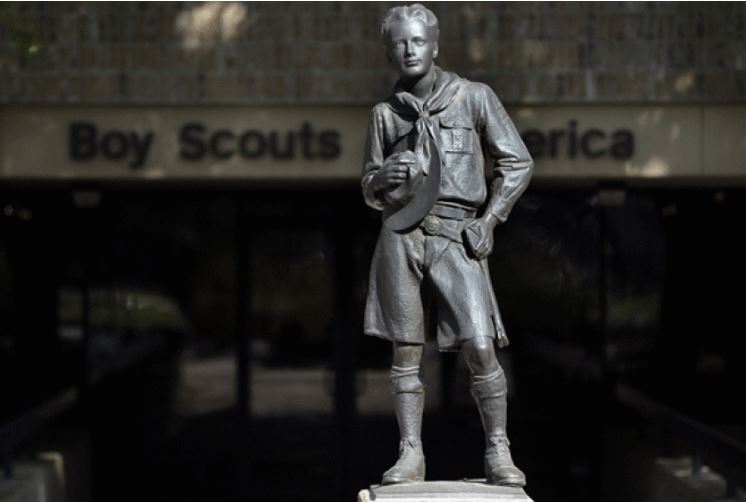 Boy Scouts of America will face more than 92,700 claims of sexual abuse in a bankruptcy that could reshape the future of the organization, lawyers say.(Tom Pennington / Getty Images)

By KIM CHRISTENSENSTAFF WRITER As reported on NOV. 16, 2020 in the L.A. Times

The Boy Scouts of America will face more than 92,700 claims of sexual abuse in a landmark bankruptcy that could reshape the future of one of the nation’s oldest and largest youth organizations, lawyers in the case said Monday as the filing deadline passed.

The number of claims and the total payouts to settle them will easily eclipse those in the sex abuse scandal that engulfed the U.S. Catholic Church more than a decade ago, plaintiffs’ lawyers say.

“This is a staggering number of cases, even beyond what I thought was out there,” said Paul Mones, a Los Angeles attorney who won a $20-million judgment against the Scouts in 2010 and represents several hundred accusers in the bankruptcy. “The scope of this is something I could never have contemplated.”

The 110-year-old Boy Scouts of America filed for Chapter 11 bankruptcy protection in February as it faced a wave of new sex abuse lawsuits after several states, including California, New York and New Jersey, expanded legal options for childhood victims to sue.

The bankruptcy put a hold on hundreds of lawsuits to allow for a potential global settlement to be negotiated. It also required new abuse claims to be handled in that venue rather than in state courts.

The Bankruptcy Court set Monday as the “bar date” by which the claims must be filed, triggering law firms’ TV and internet advertisements for prospective clients and a rush of claims in recent months.

In a statement Monday, the organization called the massive response from abuse survivors “gut-wrenching.”

“We are devastated by the number of lives impacted by past abuse in Scouting and moved by the bravery of those who have come forward,” it said. “We are heartbroken that we cannot undo their pain…. We are deeply sorry.”

The Boy Scouts conducted its own public outreach this fall, encouraging victims to seek compensation from a trust fund it will establish.

A researcher hired by the Scouts to analyze its internal records last year identified 7,819 suspected abusers and 12,254 victims — a fraction of the number who have now filed claims.

One coalition of law firms billing itself as Abused in Scouting now represents 16,500 claimants, said Andrew Van Arsdale, a San Diego lawyer involved with the group.

“The BSA was very effective at getting out the message to the men who suffered as children in their care,” he said. “The question remains if the BSA will make good on their word to make the tens of thousands of lives they altered better. The BSA failed them once as children; we hope they do not do it again this time around.”

All claims will be vetted by “third-party advisors” while the national organization develops a reorganization plan and establishes its compensation fund, the Scouts said Monday, promising to work as “expeditiously as possible.”

The size of the victims fund has yet to be determined, along with how much of its cost will be footed by the Scouts or their insurers. Some insurers have balked at covering payouts in sex abuse cases, contending the organization could have prevented the abuse that led to the claims, court records show.

At the time of the bankruptcy, the national organization had assets of more than $1 billion. Local Boy Scouts councils separately hold billions more in real estate and other assets, but it is unclear how much they will contribute to the compensation fund.

“That’s all now being negotiated between the Boy Scouts and the creditors committee and other claimants and the insurers,” said Mones, who sits on that Bankruptcy Court committee representing victims.

“We are not anywhere close to having what the final number is going to be, or even what the criteria are on which the claims will be valued,” he said. “Most likely, it will include the severity of abuse and how long it happened.”

Not in doubt, Mones said, is that the Scouts’ payouts will dwarf those made by the Catholic Church, including the Archdiocese of Los Angeles’ 2007 settlement of $660 million involving more than 500 victims.

Lawsuits against the Scouts numbered into the hundreds at the time of the bankruptcy, but the organization has never disclosed how often it has been sued or how much it has paid in settlements and judgments.

Many of the lawsuits came in the wake of the Los Angeles Times’ publication in 2012 of internal Scout records involving about 5,000 men on a blacklist known as the “perversion files,” a closely guarded trove of documents that details sexual abuse allegations against troop leaders and others dating back a century.

In its yearlong examination of the files, The Times documented hundreds of cases in which the Boy Scouts failed to report accusations to authorities, hid the allegations from parents and the public, or urged admitted abusers to quietly resign — and then helped cover their tracks with bogus reasons for their departures.

Accusers cited the files — formally known for decades as the “ineligible volunteer files” and now called the Volunteer Screening Database — as evidence the organization knew of pedophiles in its ranks but failed to protect children.

Mones and others have long insisted that the files reflect only a fraction of the abuse that has occurred in Scouting. He noted that the Boy Scouts of America holds a rare congressional charter, and he urged lawmakers to investigate the extent of the abuse indicated by the flood of claims.

He predicted that the the post-bankruptcy Boy Scouts of America would be “a leaner, trimmed-down version” of an organization that already was suffering declining membership.

He said he also expected its all-American image to suffer.

“The scope of the problem here is definitely going to change the Norman Rockwell image of the Boy Scouts,” Mones said. “I don’t see how people can see the mom-and-apple-pie part of the Boy Scouts anymore.”