In Part II of this series about the high costs of US healthcare, I’ll talk about how politicians collude with pharma to ensure their mutual interests. Bet you already know that common ground is greed and power.

For anyone who reads my column, you know that I worked in pharmaceutical marketing. What does that mean exactly? Well, I did not work at a pharmaceutical company like Pfizer, Merck, or AZ. But, rather I worked for the advertising agency who supports the pharmaceutical brands in order to disseminate marketing messages to influence physicians’ prescription writing habits. 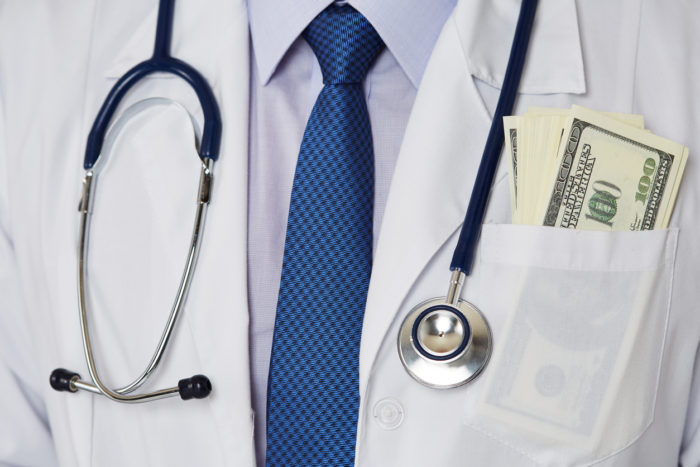 Medical Education (Med Ed) is the soft white underbelly of the advertising of prescription drugs that almost no one knows about except industry insiders. But, I can tell you, it is BIG business. EVERY pharmaceutical company pays a Med Ed agency for the implementation of a strategic plan to ensure that drugs are not only easily adopted by physicians but that they’re made to appear as just what the doctor ordered to better care for their patients. And, often it’s that spin that makes a drug look better than it actually is, in some cases.

What happens is this. A pharma company will develop a drug for a particular malady. While it’s still in Research & Development (R&D), the PR machine is already spinning a story of how great that drug is and how it’s the answer to physicians’ and their patients’ prayers. This happens years before that drug is scheduled to launch. The proliferation of marketing disguised as Med Ed is integral to the success or failure of a drug, so a lot of money and attention is paid to this subdivision of marketing that’s mostly propaganda fashioned as scientific research. And, a lot of money is paid to doctors, nurses, and hospital staff and anyone else who is a decision maker on which medication to prescribe, to whom, and when. This is a significant portion of the budget to launch a drug.

So, when you hear that R&D is costly and that’s why your prescriptions are so expensive, don’t buy that line. Much of the budget is spent by the marketing department on priming prescribers through Medical Education and grooming patients via Patient Education. And, that doesn’t even factor in the Direct-to-consumer (DTC) advertising money that is spent on magazine ads, online publications, educational and promotional websites, television commercials, and everywhere else you may see a drug promoted. We’re talking BILLIONS of dollars, people.

So, how are our elected officials helping to curb healthcare costs? My opinion is that they don’t help at all. In fact, they drive up healthcare costs. How? Thanks to Citizen’s United, the Supreme Court ruling that sanctions corporations to gird the coffers of campaign financing for politicians, pharmaceutical companies have a way to “buy in” to lawmakers. If you’re getting your next run for Senate funded by Goldman Sachs and Pfizer, are you going to bite the hand that got you elected? Yeah, that would be NO. You are going to do everything in your power to make sure that trickle of money turns into a never-ending flow of campaign funding.

Big PhRMa spends almost 3x what gas and oil lobbies combined spend on the political campaigns of their Washington allies.

Are your state representatives included in the list? How do they vote on healthcare spending and consumer protection? And, is it in your best interest or theirs? Make it your business to find out here.

There are other costs that benefit Pharma and not public health. As a former member of Project On Government Oversight (POGO), investigative journalist, Paul D. Thacker, presented a lecture on September 22, 2011 called “Dollars for Doctors. Who Owns Your Physician?” to the Harvard University Center for Ethics. Mr. Thacker had worked with Senator Chuck Grassley of Iowa, and then with POGO, a small nonprofit in Washington, DC that looks at waste, fraud, and abuse in the Federal Government.

The Senate Finance Committee in Washington is interested in trimming waste where it is apparent. Mr. Thacker became interested in what impacted drug costs, especially as it applies to doctors taking money from pharmaceutical companies and the use of ghostwriters by pharma to affect prescription writing practices, especially if there was money involved. The reason POGO is interested in drug prices is because Medicare and Medicaid are largely pharmaceutical costs and Pharma’s largest customer is the US Federal Government. One third of all drugs sold in the country is to the Federal Government so Pharma targets drugs for development that will be reimbursed by government. Read that again, taxpayer.

Mr. Thacker used as an example in his lecture a 2007 New York Times story of Forest Labs’ Lexapro. These are the costs that went into the backdoor marketing tactics, aka Med Ed, for that one drug for just one year:

Folks, that’s $77,690,000 for one drug for one year spent to influence doctors’ to write prescriptions for Lexapro. That does not include print ads in medical journals, DTC advertising like print ads, radio ads, online ads, product website, Patient Education website, television commercials, and video news releases (VNRs) to potential consumers, which can easily reach the billions.

The Washington Post reported that J&J spent $17.5 BILLION in 2013 on sales and marketing, which includes Med Ed, versus $8.2 billion for R&D. They created this lovely chart that shows the difference between marketing dollars versus R&D dollars. And, it’s four years old! So, you know it’s even more money than that now. 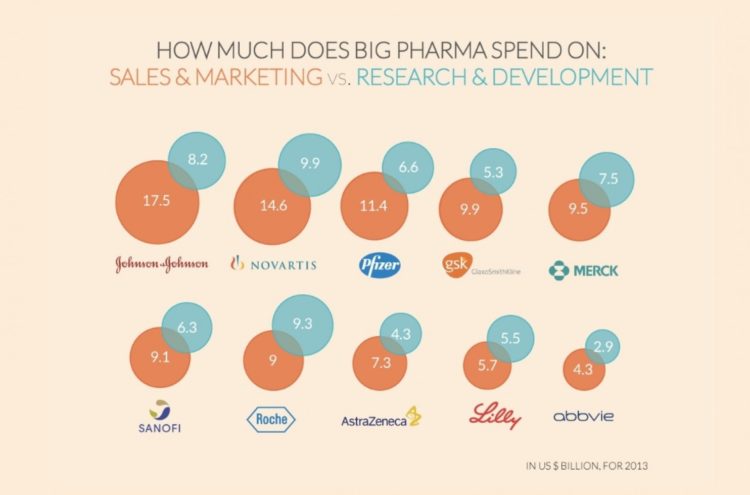 Let that sink in for a moment. The US is paying the highest price on the planet for drugs AND we pay to be SOLD on the belief that we NEED to be on these drugs. And, it’s working! How gullible are we?! And, how culpable are our legislators for their complicity in this whole unhealthy healthcare paradigm? I’d say VERY culpable.

In Part I of this article, I talked about the disparity between healthcare costs in the US versus health outcomes as compared to other countries. We can’t substantiate the prices based on our overall health. And, now we know that drug companies can’t blame high drug prices on the R&D that is conducted in the US since they spend so much more on marketing. In my research for Part II, I found so many reasons why our healthcare is exorbitantly high-priced that I’m turning this into a series. Stay tuned for Part III.

Some of the other reasons that push US healthcare costs sky high can be found in a previous article I wrote on this topic. 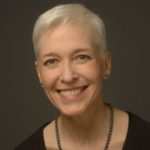