The shrieking cries of a mother pounding on her 24-yr-old son’s chest wasn’t enough to restart his heart after he collapsed in his own bedroom, the result of a heroin overdose. Upon their arrival, the paramedics began CPR. For forty-five minutes, while his mother and grandparents stood watching in horror, they continued their resuscitation effort until a faint heart beat prompted the race to the local ER. To no avail, Nicholas, a successful young college student would be pronounced brain-dead, 36-hours later, and his organs harvested for donation. 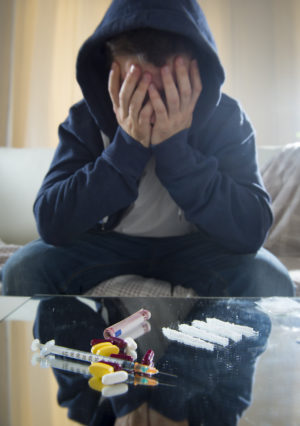 Today, a typical heroin addict is a middle-class, non-Hispanic white, 18-25-yr-old male. While heroin use has increased for all ages of both men and women of all socio-economic classes, the Centers for Disease Control (CDC) reports some of the greatest increases occurred in demographic groups with historically low rates of heroin use: women, the privately insured, and people with higher incomes. It is estimated that nearly 50% of individuals with mental health disorders suffer from substance abuse disorders.

From 2000 to 2014, nearly half a million persons in the United States have died from drug overdoses and more died in the US in 2014 than during any previous year on record. In the US, the Northeast corridor census area is tracking some of the highest numbers of drug overdose death rates in the country. Over the past decade, more than 5,000 New Jersey residents have overdosed and died, and, in 2014 alone, 781 persons died from overdose. Most of these deaths have been attributed to opioids; prescription pain medication and heroin.
Extracted from the seed of the Asian opium poppy plant, heroin is a highly addictive, illegal, opioid drug. It’s estimated that about 23% of individuals who use heroin become dependent on it. Snorted, smoked or injected, heroin can cause slow and shallow breathing, coma and death. When injected, people are at risk of serious long-term viral infections such as HIV, Hepatitis C, Hepatitis B and bacterial infections of the skin, bloodstream, and heart.

According to the National Institute on Drug Abuse, nearly half of young people injecting heroin reportedly abused prescription drugs prior to using heroin. Opioids, a class of drugs including prescription pain relievers oxycodone, hydrocodone, codeine, morphine, and fentanyl, are regularly prescribed by physicians. These prescriptions drugs are being fingered as the gateway drugs to heroin. With easy access to the prescriptions for pain, these highly addictive drugs lead patients to seek street drugs when their prescriptions are no longer refilled by their physicians. Given the high cost of these drugs on the street, users seek out heroin, a cheaper illicit drug which creates the same opioid, euphoric effect.

Fentanyl is 50 times more potent than heroin and can rapidly stop respiration — it has been found to be highly addictive. With regular use, a tolerance develops to these addictive drugs requiring higher doses to achieve the same results. Fentanyl can increase a persons’ tolerance in users who take it regularly, and is often added to heroin for a stronger, cheaper, more desirable high. In some areas in New England, fentanyl is now killing more people than heroin. The New York Times reported fentanyl alone killed 158 people last year, just in New Hampshire; heroin killed 32. A bad batch of heroin laced with fentanyl was precisely the cause of death of Nicholas, the young man written about at the beginning of this article.

So who is most at risk of a heroin addiction? The CDC reports non-Hispanic white males ages 18-25 yrs-old, individuals addicted to prescription opioid painkillers and/or cocaine, those living in large metropolitan areas and those enrolled in Medicaid or without insurance, have the greatest risk. But why aren’t they talking about those who have mental health disorders? Nearly 50% of those with mental health disorders suffer from substance abuse. Common conditions including depression, anxiety, bipolar disorder, PTSD, and schizophrenia substantially increase the risk of substance abuse. The US Department of Veterans Affairs reports 1 in 5 veterans suffer from PTSD and 22 veterans commit suicide each day in the US. As of 2012, some 33 percent of Veterans in VA care received opioids for pain management, likewise, a substantial number of vets struggle with both PTSD and substance abuse.

Fentanyl isn’t an addictive drug like heroin is? Not only is that statement false,it’s dangerous. You really need to do better research. I am a recovering heroin/fentanyl addict.

Thank you for your comment. When this article was written in 2016, not as much was known about fentanyl’s addictive qualities. You are correct though, and we are updating the article to reflect this new information.