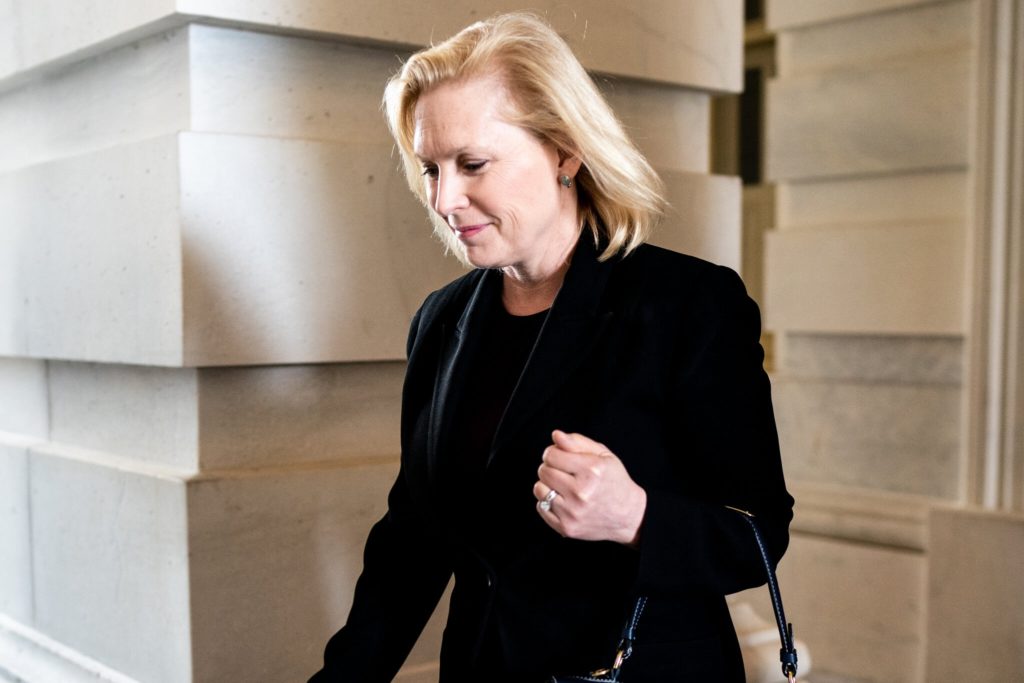 As Reported in the NY Times By Jennifer Steinhauer on April 27, 2021

WASHINGTON — After decades of failing to curb sexual assault in the armed forces,
lawmakers and Pentagon leaders are poised to make major changes in military laws that
many experts have long argued stand in the way of justice.

A bill championed by Senator Kirsten Gillibrand, Democrat of New York, would remove
military commanders from a role in prosecuting service members for sexual assault and has
gained support from scores of key members of Congress. Among them is Senator Joni
Ernst, Republican of Iowa and a retired National Guard lieutenant colonel, who said her own
experience with assault and her daughter’s stories from West Point helped shift her views on
the issue.

“I have been torn,” Ms. Ernst said in an interview. “On the one hand, I was a commander in
the National Guard and know how important that role is. But also, as a sexual assault
survivor, I know we have to do more. I never really wanted to take this out of chain of
command, but we are not seeing a difference.”

Ms. Ernst’s nod on a new bipartisan measure is likely to attract several other key lawmakers,
whose combined support could usher in the biggest change to military rules since the repeal
of the ban on service by gays and lesbians in 2010. Other senators — many of whom voted
against the measure in the past — said in interviews that they had waited long enough for
the military to solve the problem and agreed that Congress should step in.
“Adding Joni Ernst to this bill is the defining moment for passing it,” said Ms. Gillibrand, who
has pressed her colleague on the issue for years. “She is the only female combat vet among
the Republicans.”

Adding to the momentum, a panel appointed by Defense Secretary Lloyd J. Austin III has
made a similar recommendation, saying that independent judge advocates should take over
the role that commanders currently play. These independent military lawyers would report to
a special victims prosecutor, who would decide whether to court-martial those accused of
sexual assault, sexual harassment or domestic violence. The responsibilities could also
extend to those accused of hate crimes.

The change to military law would require an act of Congress.

While Mr. Austin has said he wants service chiefs to review the recommendations, he has
made clear that he is open to such a change, as has Kathleen Hicks, the deputy defense
secretary and the first woman to serve in the No. 2 role at the Pentagon. A report out of Fort
Hood, Texas, last year that detailed a culture of harassment and abuse has further cemented
views at the Pentagon and on Capitol Hill that broad changes are needed.

The efforts reflect generational changes in the armed services, with younger members
speaking out more forcefully about these issues. Just as important are the shifting views
among lawmakers who have tired of ugly stories about assault of women in the military and
the arrival of a defense secretary who is eager to assert his influence on an issue that vexed
him during his years as an Army general.

“The tide has turned,” said Eugene R. Fidell, a senior research scholar at Yale Law School
and an expert on military law. “Where the Department of Defense can be the most useful and
constructive now is in helping shape the change.”

Ms. Gillibrand and others have argued that having commanders in control has prevented
service members from coming forward out of fear of retaliation, which has led to the
softening of punishments for those who had otherwise good performance records.
This issue is not particularly partisan, unlike many major national security policy issues,
though historically more Democrats than Republicans have supported the idea of taking
away commanders’ control of these cases.

Senator Mitch McConnell of Kentucky, the Republican leader, has supported the bill, which
last received a vote in 2014. Senator Ted Cruz, Republican of Texas and a Trump ally, is a
co-sponsor of the bill. Senators Tim Kaine and Mark Warner, both Democrats of Virginia — a
state with a large military population — previously opposed the measure, but they say their
views are changing.

Mr. Warner said he would co-sponsor the bill, and Mr. Kaine appears to be shifting in its
favor.

“I have supported virtually every change within the chain of command that we can think of to
address this problem, and I’ve not been happy with the results,” Mr. Kaine said. “I don’t see
the palpable difference I was hoping for. So that leaves me very open to her proposal.”
At a news conference scheduled for Thursday, Ms. Gillibrand is expected to announce her
new compromise with Ms. Ernst, who has pushed for several additional components aimed
at preventing assault, such as cameras in common areas and better training from the earliest
entry points to the military.

“I have long said that by the time we have a survivor and a predator, we have failed,” Ms.
Ernst said. “We’ve got to do more on prevention, and Kirsten agreed.”
She said her daughter at West Point had been influential. “She shares stories about some of
the issues that are ongoing,” Ms. Ernst said. “Some have decent outcomes, but some cadets
feel justice has not been served.”

The support of Senator Joni Ernst, Republican of Iowa, is likely to attract several other key lawmakers,
whose combined support could usher in a fundamental change to the military’s justice
system.

When he was confirmed by the Senate, Mr. Austin made sexual assault one of his first
priorities. In February, he appointed an independent commission to examine the issue and
give recommendations that he and the service chiefs could consider. While the department
could make changes to policies, a move to take prosecution and courts-martial of assault
cases from commanders to a civilian-led office of a special victims prosecutor would require
an act of Congress.

The members of the panel are seeking a new career track in the Defense Department in
which judge advocates general — military lawyers — would be specially trained to deal with
such cases.

While sexual harassment is often a precursor to assault, the panel recommended that some
cases be treated differently. If a finding of harassment is substantiated, the panel suggested,
mandatory separation from the military would be initiated. In some cases, low-level
misconduct by a service member who is of lower rank than the colleague they harassed
could be offered something else, like a training intervention program. Among many other
recommendations, the panel seeks an expansion of military protective orders off base.

While Congress and the military have approved scores of changes aimed at making it harder
for those who harass and assault their peers to remain in the military, prevention efforts
appear to have not yielded success so far, a focus of Ms. Ernst’s. The Air Force is beginning
a program that uses virtual reality to work with airmen on how to respond as a bystander.
In 2019, the Defense Department found that there were 7,825 reports of sexual assault
involving service members as victims, a 3 percent increase from 2018. The conviction rate
for cases was unchanged from 2018 to 2019; 7 percent of cases that the command took
action on resulted in conviction, the lowest rate since the department began reporting in
2010.

Sexual assault causes mental health issues among female veterans, and many military
experts — including those on the independent panel — say that fear of harassment and
worse will negatively affect retention of women in the armed services.

Ms. Gillibrand has worked for years to gain support for removing commanders from trying
these cases, even as Pentagon officials and many of her colleagues opposed her.
She keeps a whiteboard in her office and meticulously works every lawmaker she believes
she can persuade. In March, when a vote on coronavirus aid was delayed several hours, Ms.
Gillibrand used that time to meander from one senator’s hideaway office near the Senate
floor to the next to buttonhole them on the issue. On Monday, she sat on a bus next to
Senator Angus King, the Maine independent who voted against her in 2014, and discussed
the issue once again.

“This has always been an issue as to whether you are willing to stand up to status quo and
the generals, and not all senators have the disposition to do that,” Ms. Gillibrand said. “I am
cautiously optimistic we have the votes.”

A similar legislative effort is in the works in the House.

Representative Jackie Speier, Democrat of California, who has long worked on behalf of
women in the military, proposed the I Am Vanessa Guillen Act, named for the Army specialist
who law enforcement officials said was killed by another soldier at Fort Hood last year. The
case set off a deep examination into the culture of the Army base and a military in which
assault thrives. Ms. Guillen’s family has said she was being sexually harassed before her
death, but she had feared reporting it to her chain of command.

Over a dozen Army officials were fired or suspendedas a result of the report.

The efforts will no doubt face resistance within and outside the military.
“I continue to remain highly doubtful that this change in and of itself will have significant
impact on how cases are handed,” said Victor M. Hansen, a professor at New England Law
Boston and a former military lawyer. “These are very complex, difficult cases that have very
little to do with whether it’s a commander or attorney making the decision to prosecute them.”
Others disagree. “Public confidence in the administration of justice today requires that
prosecutorial decisions involving serious crimes be made by persons with legal training,” Mr.
Fidell said.